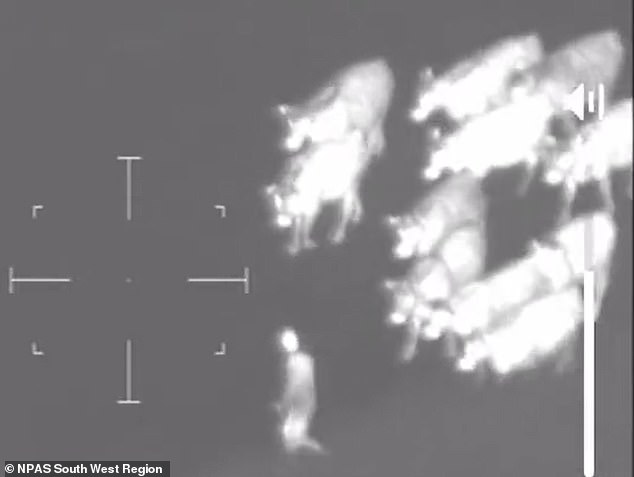 The thin MOO line! Moment on-the-run suspect was rounded up and chased by herd of COWS out of their field…and into the arms of Devon police

This is the bizarre moment a man on the run from police found himself trapped in a field after being surrounded by a herd of curious cows.

The suspect had fled the scene of an alleged crime and police tracked his movements with a helicopter in the ensuing chase.

The National Police Air Service (NPAS) then captured the animals rounding him up and removing him from their field in Devon.

A police helicopter recorded the moment the man appears to be marched off the field by the bovines.

A spokesperson for NPAS said. ‘Watch the moment a man on the run from Devon and Cornwall Police was herded up by a group of cows in Devon and mooved out of their field into the arms of waiting Police Officers – however we did have to remind the cows not to take the law into their own hoofs.

‘It was a high steaks incident – he was told to stop running but it clearly went in one ear and out the udder – great team effort as always.’

A fellow police officer tweeted: ‘Trying to escape?? How dairy*.’

In response, one person said: ‘Meanwhile Sir Loin later gave interview on how his fellow cows rounded up the suspect.’

Another penned: ‘They should be udderly proud of their action.’

Whilst one wrote: ‘Suspect to face the ‘moo sic.’