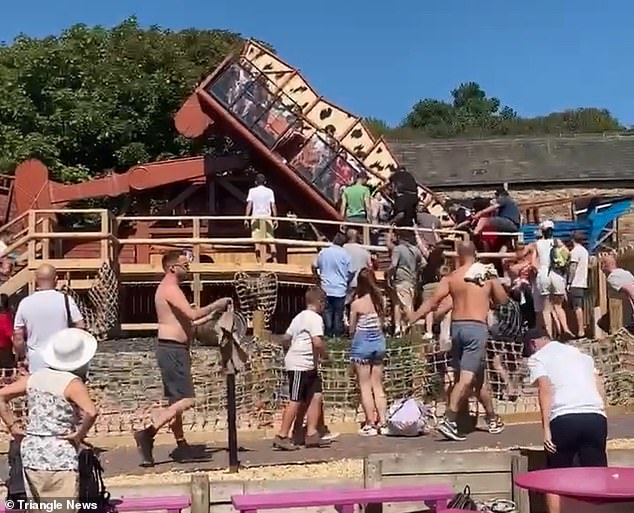 ‘Terrified’ thrill seekers made a lucky escape after a ride at the UK’s oldest theme park ‘suddenly smashed to the ground’.

Young children and adrenaline junkies were left frantically trying to clamber free as the Shipwrecked ride, at Blackgang Chine theme park on the Isle of Wight, tipped onto its side and collapsed.

Spectators at the amusement park rushed to help those trapped as people stuck on the ride started to hysterically scream.

Two men were taken to hospital with leg and shoulder injuries, but neither were seriously harmed.

Samantha Downham, who was on the ride at the time, said: ‘It started going really slowly and then all of a sudden it just tipped to one side.

‘We thought it was part of the ride, and then a lady started screaming because I think her arm was in between the side of the ride and the barrier.

‘Then, a load of people started coming over and others started trying to climb out and get down.’

The park, near Ventnor, remained closed for the rest of the day on Monday and reopened yesterday morning.

The Shipwrecked ride will remain closed while an investigation is underway.

Video footage shows onlookers running onto the ride to help free those who were stuck.

Onlookers rushed to the scene after the Shipwrecked ride, at Blackgang Chine theme park on the Isle of Wight, suddenly collapsed. Two men were taken to St Mary’s hospital in Newport with minor injuries.

She said: ‘My family, which includes a three-year-old, were on the ride and it began to make an odd sound.

‘It then collapsed, which caused them all to go to one side and be squished.’ 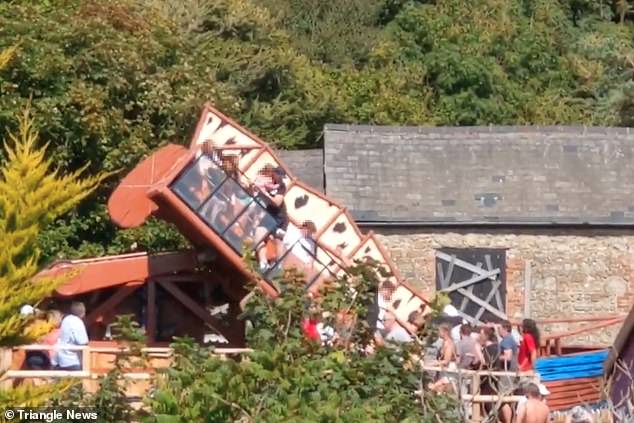 Blackgang Chine is the UK’s oldest theme park. ‘Terrified’ children and adult were forced to scramble free while witnesses tried to free those who were trapped. The ride will now remain closed until the investigation has concluded.

Miss Westlake, from Weston-Super-Mare in Somerset added: ‘My partner ran to grab my nephew and ended up pulling everyone else off the ride.

‘After everyone was off, we noticed my brother-in-law, who is 20 hurt his leg and was unable to move it, or feel anything in his left leg.

‘My other brother-in-law has done something to his shoulder.’ 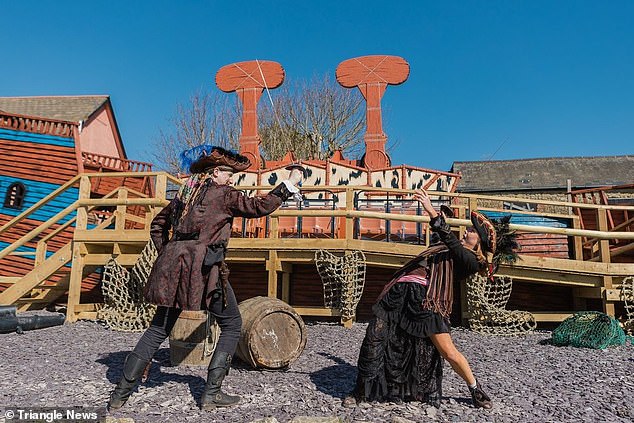 Blackgang Chine first opened in 1843. A spokesperson said that ‘safe performance’ of the rides at the park is a priority.

The two men were then taken to St Mary’s hospital in Newport.

Mark Duncan, from Aylesbury, whose wife, daughter and grandson had been on the ride 20 minutes prior, also witnessed the panic.

He said: ‘The ride was at its peak height when it smashed to the ground on its right side making a really loud noise.

‘Everybody on the ride was immediately thrown to their left side and appeared to be really tightly scrunched together. 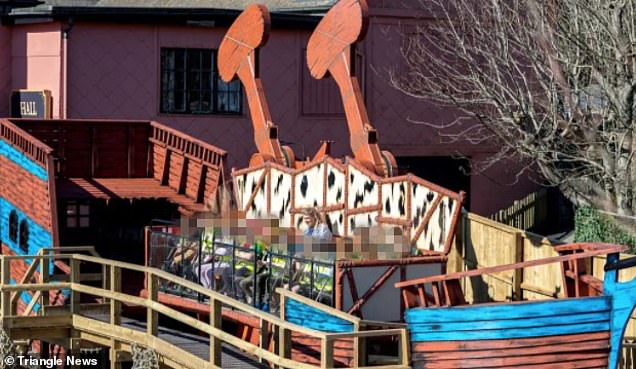 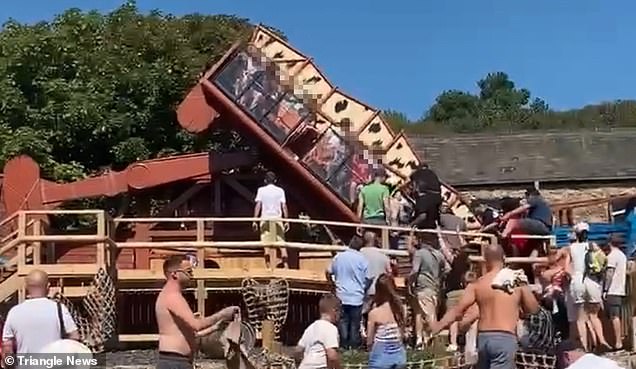 The Shipwrecked ride operating normally (left) and after the collapse (right). Children were among those on the ride when it suddenly ‘smashed to the ground’. The Shipwrecked is a magic-carpet-styled attraction.

‘There were lots of terrified screams and one girl was completely hysterical even after her feet were on solid ground.’

The 179-year-old amusement park first opened in 1843 and quickly became a popular attraction for the Victorians.

The park’s first attraction was a giant whale skeleton that brought a lot of curiosity to the site. 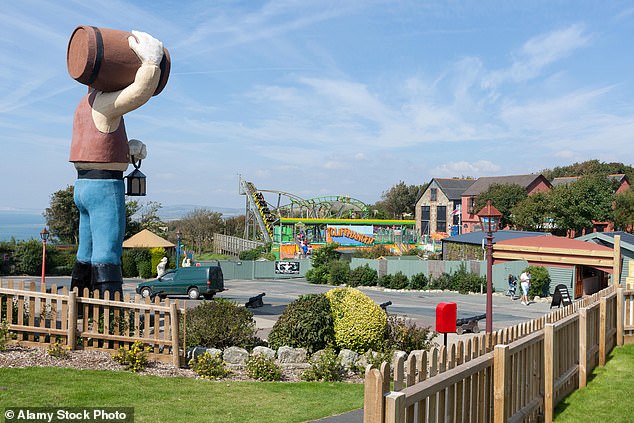 Blackgang Chine theme park calls itself the ‘land of imagination’.  It has over 13 different attractions including a magical pet shop and the Isle of Wight’s biggest waterslide.

Ten years after opening it received the royal seal of approval after a visit from Queen Victoria.

Descendants of the creator, Alexander Dabell, still own and run the park which has over 13 different attractions including a magical pet shop and the Isle of Wight’s biggest waterslide. 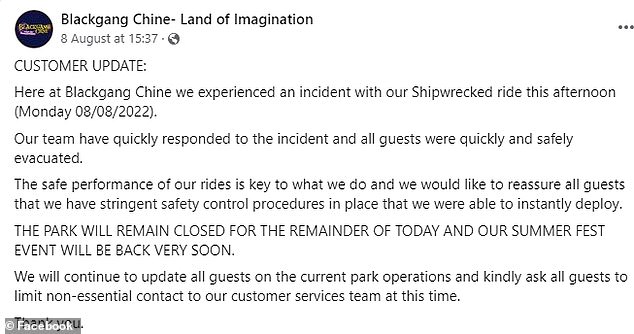 The theme park posted a statement to its Facebook page on Monday afternoon after the ride collapsed. It said that the park would remain closed for the rest of day.

‘Our team have quickly responded to the incident and all guests were quickly and safely evacuated.

‘The safe performance of our rides is key to what we do, and we would like to reassure all guests that we have stringent safety control procedures in place that we were able to instantly deploy.

‘We can confirm that no serious injuries were sustained, and an NHS Ambulance attended the scene.’

An Isle of Wight NHS Trust Ambulance spokesperson said: ‘Two people were taken to hospital by ambulance with minor injuries.’