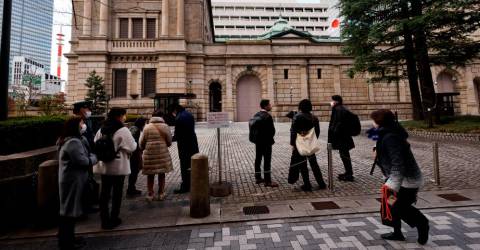 : Business confidence at big Japanese firms slid in January with manufacturers showing a negative reading for the first time in two years, the Reuters Tankan survey found, reflecting a slow recovery from the pandemic amid a global economic downturn and rising living costs.

The drop in morale could undermine policymakers’ hopes for Japanese firms to boost investment and accelerate wage increases that would outpace rises in inflation.

The Reuters Tankan index for big manufacturers stood at -6 in January, down from +8 last month, with car, electronics and textiles manufacturers among the gloomiest sectors.

The negative reading – the first since January 2021 – indicates that the number of firms that said business conditions were poor was greater than those that said they were good. It was the most pessimistic reading since December 2020.

“Uncertainty over the business environment and capital spending by our clients is growing due to the spread of the coronavirus in China and rises in raw material costs due to the Ukraine war,” a manager at a machinery maker wrote in the comment section of the survey.

“Prices are rising everywhere including prices for gas and electricity, materials, shipping and processing machinery. And some clients won’t swallow price hikes, squeezing our profits to a degree,” wrote a manager at a metal firm.

Morale was much stronger in the service sector, with that index at +20 in January, a drop from +25 in the prior month which was its highest level in more than three years. Among non-manufacturers, only the real estate and construction sectors had negative readings.

Japan’s economy, the world’s third largest, unexpectedly contracted by an annualised 0.8% in the third quarter, hurt by a weak yen and higher costs of living and for doing business.

The big manufacturers’ index saw a 12-point improvement to +6 for April, while for service sector firms the outlook fell 5 points to +15.

A separate Reuters poll has shown that economists expect Japan’s gross domestic product to climb by an annualised 0.9% in the current quarter.

Later on Wednesday, Japan’s central bank will wrap up a two-day policy-setting meeting.

Last month it kept its ultra-easy policy but shocked markets with a surprise tweak to its bond yield control that allows long-term interest rates to rise more. Speculation is also rampant in financial markets that the Bank of Japan – an outlier among global central banks aggressively increasing rates – will move to phase out dovish governor Haruhiko Kuroda’s policies of massive stimulus when he steps down in April.