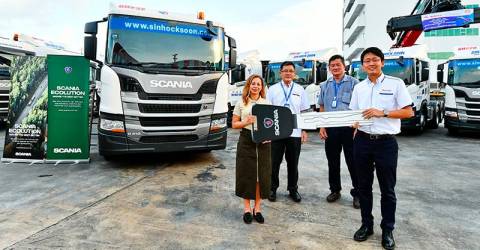 Sin Hock Soon Group will also secure its position as “A Good Company” by operating those new NTG lorries under the well-known Scania Ecolution – a tailor-made partnership between Scania and its customers that focuses on reducing fuel consumption resulting in reduced carbon dioxide (CO2) emissions.

The partnership also focuses on reducing operating cost translating to improved profitability, while fulfilling the growing demand for environmentally-friendly initiatives.

A memorandum of understanding signing ceremony was held recently to order 30 more NTGs to add to the company’s existing order of 33.

Scania Southeast Asia managing director Heba El Tarifi said: “I would like to congratulate Sin Hock Soon Group for being at the forefront in driving the shift towards a sustainable transport system. Their emphasis on safety, uptime and quality service are befitting a company that is truly modern, a brand that is truly premium. Subscribing to the Scania Total Solutions approach will continue to help bring greater profitability and sustainability to their business and their customers.”

All the NTGs come with the standard advanced driver assistance system (ADAS) that features anti-lock brake system, electronic braking system and the retarder.

The implementation of ADAS in the NTGs, together with proper and authorised regular maintenance, reduces traffic accidents and casualties, reduces traffic congestion and the subsequent repair of road infrastructure caused by accidents.

Scania Malaysia stated that all the NTGs that are on IPR&M (eight units) and Inclusive Maintenance* package (four units) are assured of Scania’s maintenance procedures that are proactive to avoid time-consuming and costly breakdowns from occurring to maximise uptime while reducing Sin Hock Soon Group’s operating costs.

“In line with the Science Based Target initiative (SBTi) to meet the carbon footprint reduction targets that Scania has committed to, Sin Hock Soon Group joined the Scania Ecolution partnership agreement as an opportunity to improve fuel economy while caring for the environment. This is done via the tracking and improvement of the Ecolution drivers’ performances through the Fleet Management System Control 10 that comes with the repair and maintenance package. Sin Hock Soon Group will progressively and systematically reduce their carbon footprint.

“All the Sin Hock Soon Group’s NTGs are also pre-set default with the Economy mode. This is to further ensure that the company enjoys the best fuel economy and CO2 emission reductions, in line with the SBTi.”

*Discussed and agreed upon before signing, Inclusive Maintenance packages vary, depending on what the customers normally need for repairs.