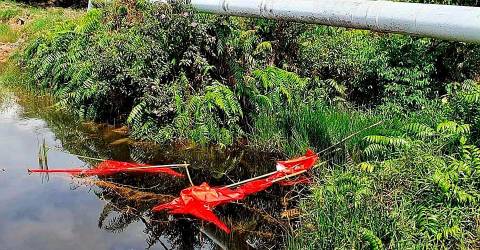 KLUANG: More than 200 Pakatan Harapan (PH) flags put up along a path in Kampung Parit Kuari near Ayer Hitam, here, have been removed and dumped into a ditch, believed to have been done by some irresponsible persons.

PH’s candidate for the Ayer Hitam parliamentary seat in the 15th General Election (GE15), Sheikh Umar Bagharib Ali in a post on his Facebook said party workers who planted the flags realised what had happened at about 8 am yesterday after only six hours they were put up.

“We are very disappointed with this kind of gangster politics and condemn any party that uses dirty tactics in the election.

“This attitude smears democracy which allows political parties to campaign healthily and in accordance with the rules set by the Election Commission (EC) and also the authorities,“ he said.

“We will continue to fight and campaign ethically. We will also continue to work hard to ensure PH’s victory in the Ayer Hitam parliamentary seat,“ he said.

Meanwhile, Batu Pahat District Police Chief ACP Ismail Dollah, when contacted by Bernama today, said police have not yet received any reports regarding incidents of political party flags being removed or thrown away.