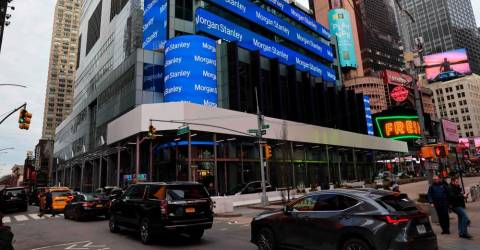 NEW YORK: Morgan Stanley reported a smaller-than-expected 41% drop in fourth-quarter profit on Tuesday (Jan 17) as the bank’s trading business got a boost from market volatility, offsetting the hit from sluggish dealmaking.

Dealmaking was at a virtual halt for most of last year as risk appetite waned sharply in the face of rapidly deteriorating macroeconomic conditions and geopolitical tensions.

The gloom follows what was a bumper 2021 for Wall Street’s investment bankers who advised on multi-billion dollar mergers and buyouts, while underwriting listings of some of the biggest clients to tap the public markets in over a decade.

Revenue from Morgan Stanley’s investment banking business fell 49% to US$1.25 billion (RM5.4 billion) in the fourth quarter, with revenue declines across the bank’s advisory, equity and fixed income segments.

The investment banking business slowdown weighed on the company’s net revenue, pulling it down 12% to US$12.7 billion.

“As far as investment banking is concerned, it has been a rough year for the stock market so I don’t think anyone expects the industry to report huge earnings,” Peter Cardillo, chief market economist at Spartan Capital Securities in New York, said.

Trading has been a surprise bright spot for Morgan Stanley, with the unit’s revenue jumping 26% to US$3.02 billion in the fourth quarter, as clients look to hedge against market risks by rejigging portfolios towards more defensive assets.

The bank’s wealth management business, which tends to generate steady income, saw revenue climb 6% in the quarter, as interest income increased amid the Federal Reserve’s interest rate increases through most of last year.

Morgan Stanley wraps up a mixed fourth-quarter earnings for the big US banks. Its closest rival Goldman Sachs Group Inc on Tuesday reported a bigger-than-expected 69% drop in quarterly profit due to heavy losses in its consumer business and a slump in dealmaking.

On an adjusted basis, Morgan Stanley earned US$1.31 per diluted share, the bank said.

Profit applicable to the company’s common shareholders for the three months ended Dec 31 was US$2.11 billion or US$1.26 per diluted share.

According to Refinitiv data, analysts expected the bank to report a profit of US$1.19 per share.

Morgan Stanley increased its provision for credit losses in the fourth quarter to US$87 million from US$5 million a year earlier amid worries of a looming recession in the US and worsening consumer credit quality. – Reuters