This year, the 33-year-old mother will have Christmas surrounded by family, including baby Olivia, but facing the prospect that it could be her last.

On Christmas Day, it will be exactly three months since Mrs Durkin was diagnosed with lung and bone cancer.

Beth Durkin, 33, (pictured with husband Marc, and daughters Olivia, one, and Rhiannon, five) was diagnosed with the cancers less than three months ago

‘It was written all over their faces,’ said Mrs Durkin, recalling the moment she was told she had cancer.

‘I asked if whatever I had was serious, they just wouldn’t tell me. I said ”Is it bad?” and the consultant said, ”well it’s not good news”.’

She said her first question was ‘how long?’

She was told she had six to 12 months to live. ‘He said something after that, but after I heard six to 12 months, I stopped listening,’ said Mrs Durkin, who also has a five-year-old daughter called Rhiannon with husband Marc.

Mrs Durkin, who lives in Taff’s Well, Wales, had already been through so much. While expecting her daughter Olivia, Mrs Durkin was told at her 20-week scan in July 2018 that her baby had Truncus Arteriosus.

This meant Olivia was missing a heart valve and was going to need major heart surgery.

Olivia was later diagnosed with DiGeorge Syndrome, a condition present from birth that can cause a range of lifelong problems, including heart defects and learning difficulties. 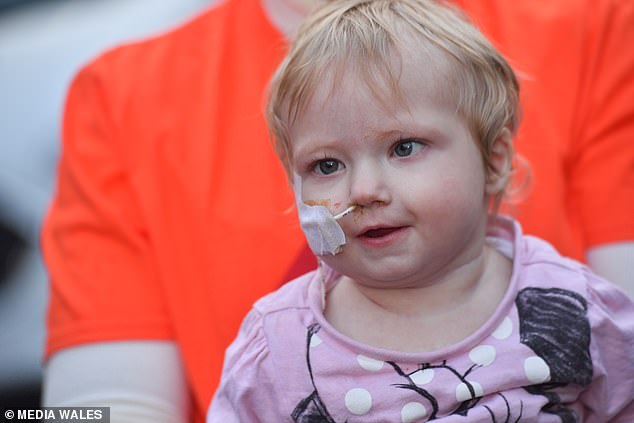 Her daughter, Olivia, was born with Truncus Arteriosus (a missing heart valve) as a result of her DiGeorge Syndrome so had to undergo major surgery last year 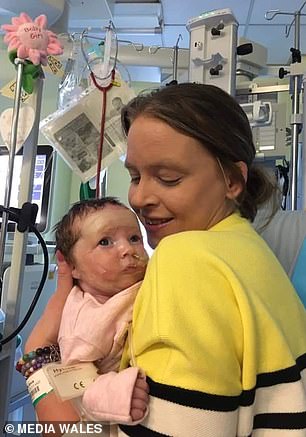 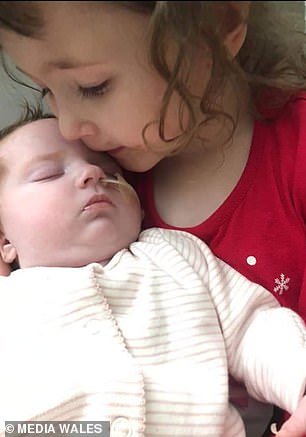 DiGeorge Syndrome is caused by a problem with a person’s genes called 22q11 deletion, where a small piece of genetic material is missing from a person’s DNA

DiGeorge Syndrome is caused by a problem with a person’s genes called 22q11 deletion, where a small piece of genetic material is missing from a person’s DNA.

There is no cure.

The option to terminate the pregnancy there and then was offered, but instead, Mrs Durkin researched the condition at length. ‘I decided to continue with the pregnancy,’ said Beth.

She could not contemplate the alternative.

What is DiGeorge syndrome?

DiGeorge syndrome is a condition present from birth that can cause a range of lifelong problems, including heart defects and learning difficulties.

The severity of the condition varies. Some children can be severely ill and very occasionally may die from it, but many others may grow up without realising they have it.

DiGeorge syndrome is caused by a problem with a person’s genes called 22q11 deletion. It isn’t usually passed on to a child by their parents, but is in a few cases.

It’s often diagnosed soon after birth with a blood test to check for the genetic fault.

Both Mrs Durkin and Rhiannon were subsequently tested and found they also carried the gene. In around 10 per cent of cases, the 22q11 deletion is passed on to a child by a parent who has DiGeorge syndrome, although they may not realise they have it if it’s mild.

Olivia was born on November 9, 2018. After a brief few hours, she was whisked away to intensive care and at just 10 days old, underwent major heart surgery to repair a missing heart valve at Bristol Hospital.

The operation lasted a full 12 hours. Olivia’s heart stopped twice. She was so ill, surgeons left her chest cavity open for a full week afterwards in case she had another cardiac arrest.

‘They didn’t expect her to live,’ said Mrs Durkin. She could only watch as little Olivia went into seizures lasting up to two hours at a time, her tiny limbs twitching like she was in a night dream.

For nearly three months, not a day went by where Mrs Durkin wasn’t at her daughter’s bedside. Husband Marc stayed at the family’s home in Tongwnlais to keep life normal for Rhiannon and to keep working. The family still had bills to pay.

Their fragile daughter fought hard, all the while hooked up to machines and masks and pipes. Doctors left her heavily sedated to stop her getting upset.

On New Year’s Day 2019, Olivia suddenly turned a corner and went from strength to strength. By the end of January, she was finally allowed back home.

But just as the family of four started feeling optimistic about the future, the next devastating blow was waiting around the corner.

Mrs Durkin wanted to be by her daughter’s bedside every day for the three months after her birth. She shrugged off a niggling hip pain as being a trapped nerve and why she nearly didn’t bother going for a MRI scan. 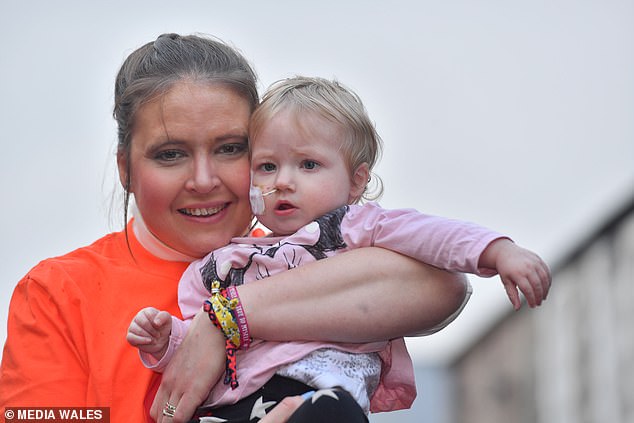 Once back home, Mrs Durkin was unable to ignore the sharp pain in her hip bone, which she initially put down to being a muscular issue.

The pain got worse and after weeks of going back and forth to the GP, and an MRI scan, doctors discovered the niggling pain in Mrs Durkin’s hip was actually something a lot worse.

On September 25, in a consultant’s room in Llandough Hospital, Mrs Durkin was told she had secondary bone cancer. The primary cancer was in Beth’s lungs.

‘It hasn’t sunk in yet,’ said Mrs Durkin. ‘I don’t think I have accepted it. I dread the day it does sink in to be honest.’

She looks down at Olivia who is happily playing with her mother’s plaited hair. ‘It would be easier if I knew Olivia was safe and going to be OK,’ she said. ‘I would be more OK with it then. But I brought her into this world and I want to be the one to make sure she is OK.

‘I feel bad that I brought her into this world. I should see it through, that’s the least that I should do as a mum,’ she said.

Olivia will need another heart op before her second birthday, and will also need another op to replace her valve as she grows. The thought that Mrs Durkin might not be there for her daughter is one she cannot put into words.

‘I’m still trying to process it,’ Mrs Durkin said. ‘The kids keep me going. I don’t know what to say – I still feel new to all this.

‘I try to keep life as normal as I can, but I’m not sleeping my mind just won’t shut down.’

The family have planned a trip to Disneyland Paris in the new year. ‘I might not get a chance to go again,’ said Mrs Durkin. I might not be here next Christmas.’

Mrs Durkin’s mother Shirley Wiseman, 58, is sat opposite her and tells her: ‘You’re doing all the right things and we’re looking for the next treatment. We have to hope.’

Sian said: ‘I try and get into her headspace. I try and imagine what it must be like.’

‘We are devastated. I just feel useless.

‘Most people dealing with this are in their 60s or 70s. They get to go home after treatment and relax, but Mrs Durkin is only 33 – she has a husband and two kids.’

Mrs Durkin met Marc on a night out in Cardiff and the couple married in June 2010 and had Rhiannon in 2014.

So far she has been receiving chemotherapy and immunotherapy through the NHS.

The family are trying to raise money to fund additional private treatment that could allow more targeted treatment for Mrs Durkin and give her a better chance of survival.

Her dad Robert said: ‘We are grateful to have Olivia alive and well with us this Christmas, but our celebrations didn’t last long.

‘What does a dad do? We are now raising money so that we can access that treatment and give Bethan the best chance of surviving this devastating illness.’

‘It doesn’t seem real, it was just a pain in the hip,’ said Mrs Durkin. ‘We never ever thought we would end up here. We have had our fair share.

‘After we got Olivia home, I thought finally this Christmas would be the one we should have had last year. But then to be be told this, it’s just unfair.’

You can donate to Mrs Durkin’s fundraising page here.