A mother whose baby almost died after contracting the common Strep B virus from her during childbirth claims she was told by midwives he just needed his nappy changing – and the ordeal has left her with post-traumatic stress disorder (PTSD).

But four hours after he was born, Anna began to suspect there was something wrong. When she shared her concerns with midwives, they were initially dismissed as her son merely ‘needing a new nappy’.

Worried it was something more sinister, Anna persevered – and doctors eventually whisked Oliver away to the neo-natal intensive care unit.

It turned out he had a Strep B infection – also known as group B streptococcus (GBS) –  which had triggered pneumonia, a collapsed lung, sepsis and a kidney and liver infection. He also needed a lumbar puncture to check for meningitis. 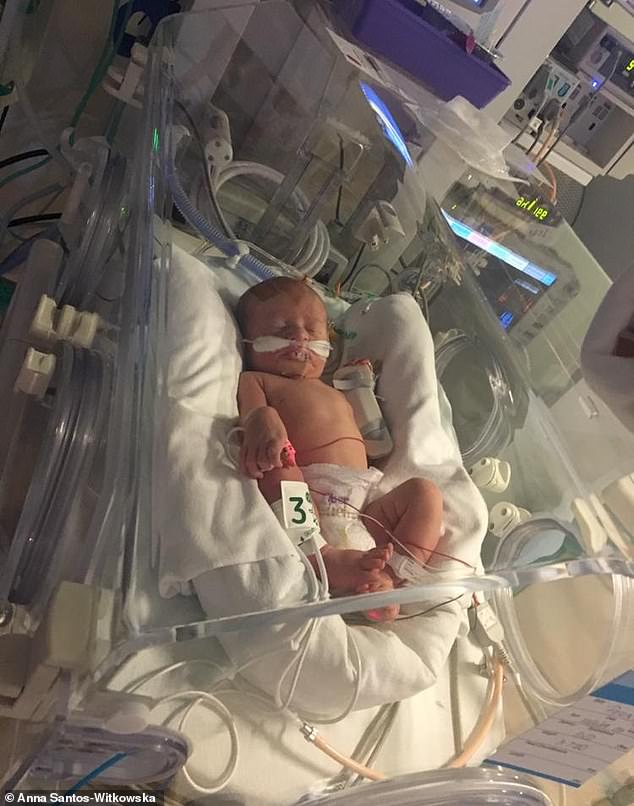 Four hours after Oliver was born, Anna began to suspect there was something wrong – and she was right. He had contracted the common group B streptococcus (GBS) infection from her during childbirth. Pictured in the neo-natal intensive care unit

His critical condition was attributed to GBS, an infection passed on by the mother during delivery which develops in babies very quickly. Anna is now calling for all pregnant women to be routinely tested for the condition.

‘I was so lucky that my mother’s intuition kicked in as we managed to catch the infection before it caused any permanent damage,’ Anna told FEMAIL.

‘I had never heard of GBS. England is one of the only countries to not routinely screen for the infection.

‘A woman can have a totally healthy baby throughout the whole pregnancy and in a matter of hours everything can change.’ 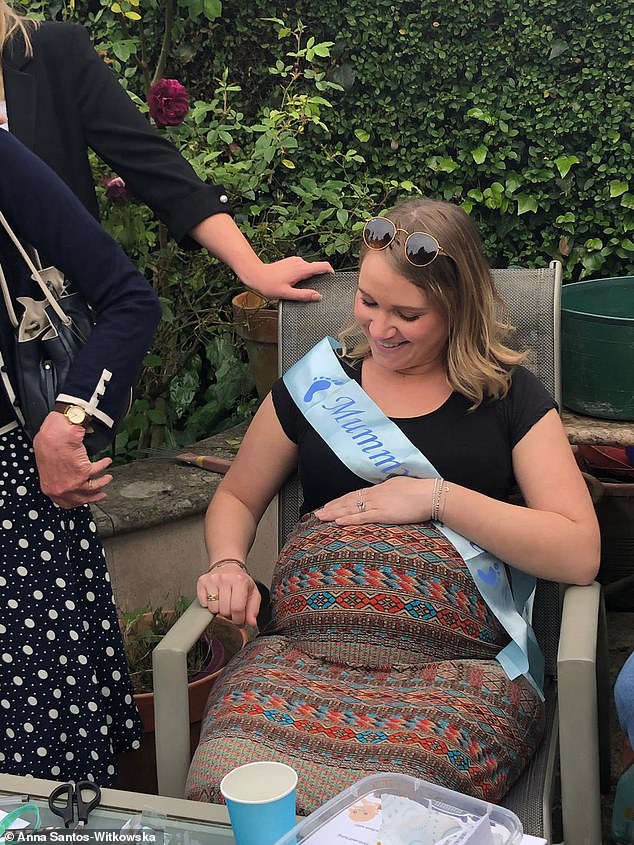 Anna, pictured while pregnant, had no idea she was a carrier of GBS so didn’t get tested for it before giving birth 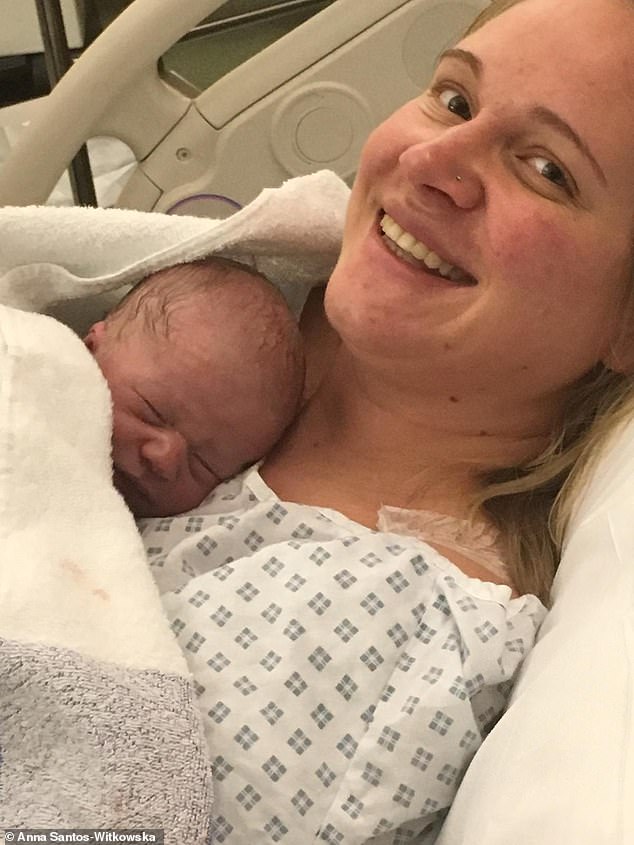 When Oliver was born, doctors informed the couple that the chord had wrapped around his body, restricting his movement

Although Oliver made a full recovery, Anna admitted she spent the first five weeks of his life terrified that something awful might happen to him.

‘I had such a hard time recovering from everything and have suffered with panic attacks and post-traumatic stress disorder,’ she said.

‘I was terrified of anything happening to him and kept finding things to worry about. I am very lucky to have family and friends who have supported me and helped me get back to being myself.’

Anna told how she went into the early stages of labour on June 20. When her mild contractions stopped she was called into hospital and she couldn’t feel much movement from the baby. 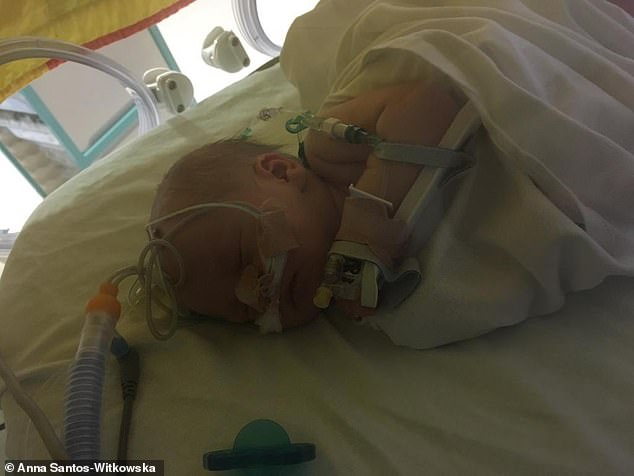 Throughout the time Oliver was poorly, Anna and Romek were terrified. Pictured: Oliver in an incubator undergoing antibiotic treatment

His heartbeat was detected and she was sent home and told to return the following day, at which point she’d be induced.

Anna’s waters broke the following morning so she arrived early and claims she was put into a room with four other women, all of which were in the early stages of labour.

‘Throughout my pregnancy I had always been told that, once your waters break, the delivery should be induced to ensure the baby is out by a maximum of 18 hours.

‘I was kept on the ward for 34 hours and told they were short-staffed before I was taken to the delivery suite to be induced.’ 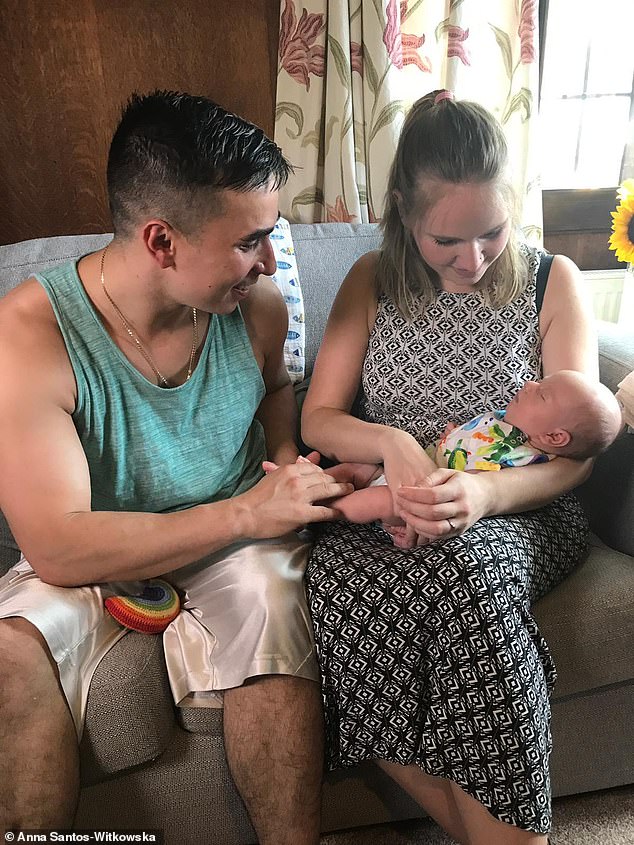 When Anna and Romek were finally allowed to bring Oliver home, after a week in hospital, Anna said it felt surreal 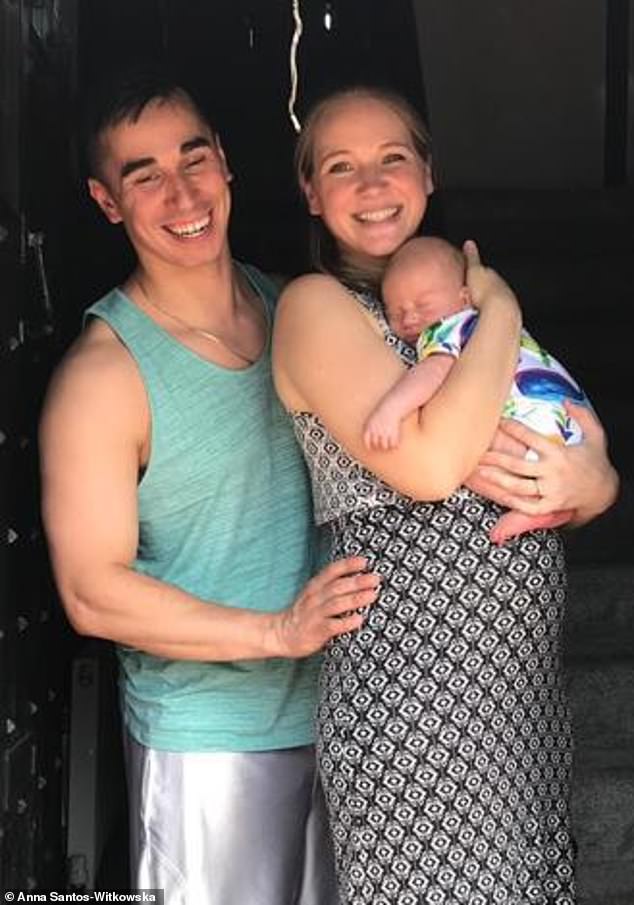 Group B streptococcus (GBS) is a bacteria that is carried by up to 40 per cent of adults, usually in the gut, and 25 per cent of women in their vaginas, without typically causing symptoms. Pictured: Anna and Romek with Oliver

Once Oliver was born, Anna and Romek, 33, were told the chord had been wrapped around Oliver several times, restricting his movement.

‘I called for the midwife to come back in and she said that it was because he needed his nappy changed,’ she recalled.

‘She changed him and then left again. I continued to notice that my baby seemed very uncomfortable and was pulling an unusual face. I called her in again and insisted that he was checked over again.

What is a Group B streptococcus  infection?

Group B streptococcus (GBS) – more commonly known as Strep B – is a bacteria that is carried by up to 40 per cent of adults, usually in the gut, and 25 per cent of women in their vaginas, without typically causing symptoms.

One in every 2,000 babies is diagnosed with the infection, according to figures from the NHS. It kills in around 10 per cent of cases.

It’s estimated about one pregnant woman in five in the UK carries GBS in their digestive system or vagina. The rate of GBS infection in newborn babies in the UK is 2.5x that of the US.

Infants can suffer early-onset GBS infections, which are much more common and occur when the infant is up to six days old, if they come into contact with the bacteria in the womb or during birth.

This causes them to develop rapid breathing problems and blood poisoning.

Late-onset GBS infections, which occur between seven days and up to three months, usually cause sepsis and meningitis.

Adults may experience infections of the:

‘Throughout this time I was terrified, and then the doctor said he was going to have to take my baby.

‘My husband went with him and I had to wait to be told that I was allowed to go. When I went down to see my son he was in an incubator with several tubes attached to him.

‘It was awful, I saw my husband crying and I had no idea what was happening.’ 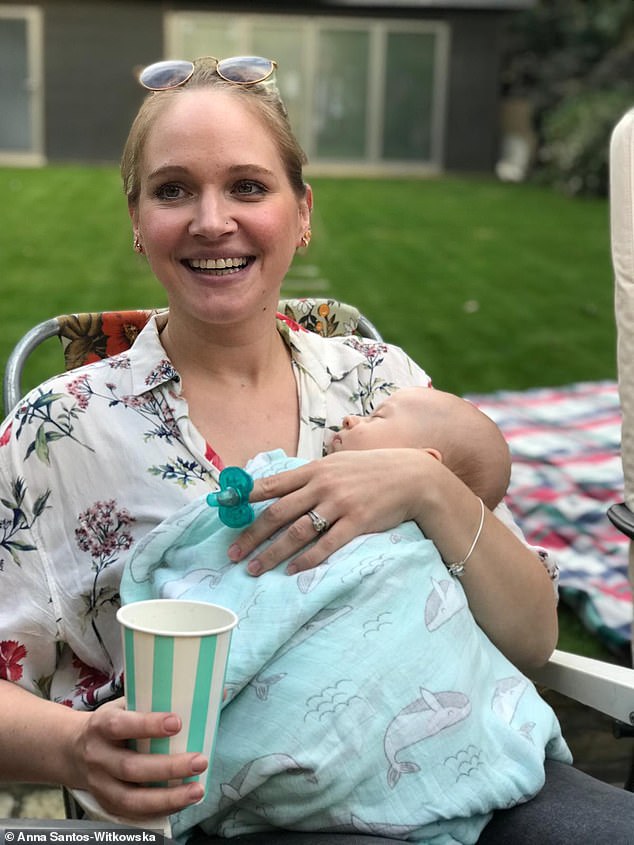 Since the ordeal, Anna has set about raising awareness of GBS and is keen to support other mothers going through postnatal PTSD

The couple were informed by the consultant that Oliver had many forms of infection and handed a leaflet about GBS, told this was the reason.

‘We weren’t sure whether or not we’d be coming home with a baby and it was by far the worst moment of my life,’ Anna said.

‘Reading the leaflet made me worry even more. Since coming home I have researched GBS as much as possible and want to do everything I can to teach others about it.’

Oliver remained in hospital for a week before he was allowed to go home.

‘Whenever my husband would leave, I would cry because I was scared,’ Anna admitted. 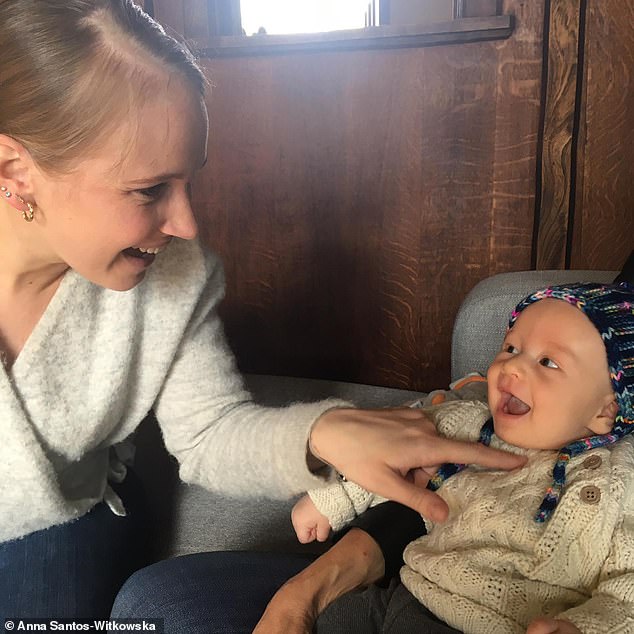 Anna said she struggles to remember the happy times of Oliver’s first few weeks, as she was still traumatised

‘When we got home, it felt surreal, as if we’d been in hospital for months. It was quite overwhelming and daunting. Now, when I look back at that time, I really can’t remember my beautiful newborn baby as much I can remember how scared and sad I felt.’

Since the ordeal, Anna has set about raising awareness of GBS and is keen to support other mothers going through post-natal PTSD.

‘The moment I found the GBS support charity, I found something new to focus on,’ she said.

‘I stopped letting the negativity and worries take over and worked as hard as I could to stop other women and babies from being out in the same position, or worse. 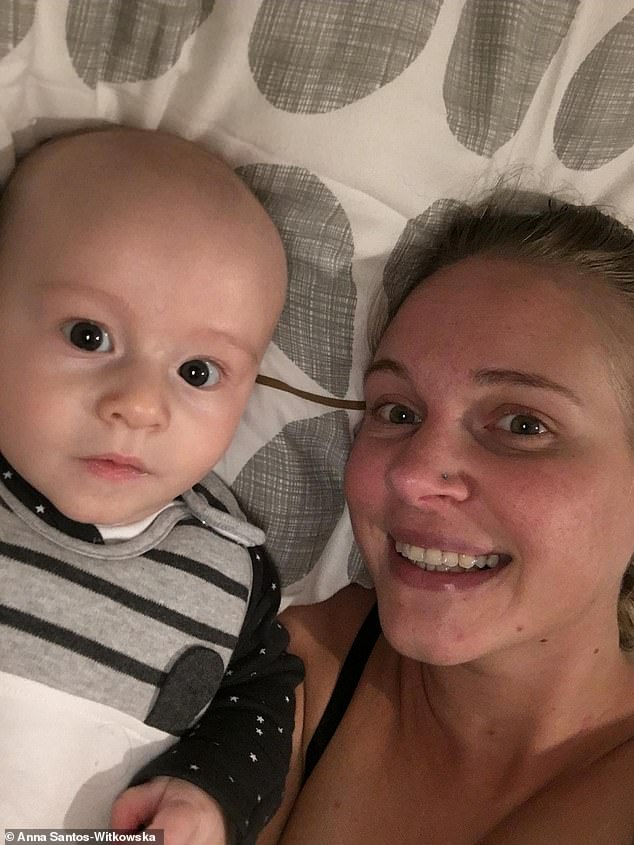 Anna said the moment she found the GBS support charity, she felt she had found something new to focus on

‘There is a £39 test that pregnant women can do at around 38 weeks pregnant which says whether or not they carry the infection. It is totally preventable, as all that needs to be done is the mum given an antibiotic during her labour, or opt for a C-section.

Last month, Oliver was back in hospital after experiencing seizures, which Anna feared could be epilepsy, as Romek is epileptic, or from the GBS. Thankfully the consultant said it was most likely Sandifers, a form of reflux. 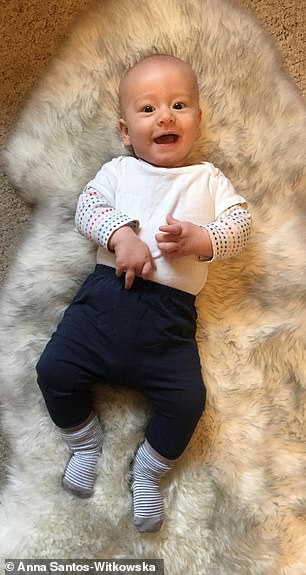 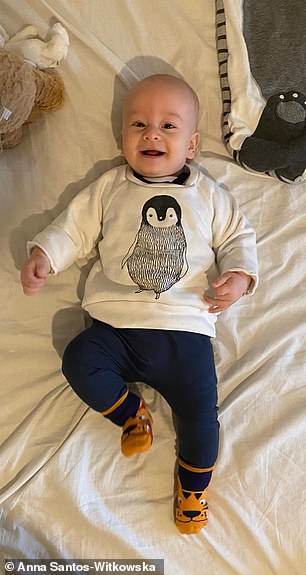 Thankfully Oliver has no lingering conditions from his infection, for which his parents are very relieved 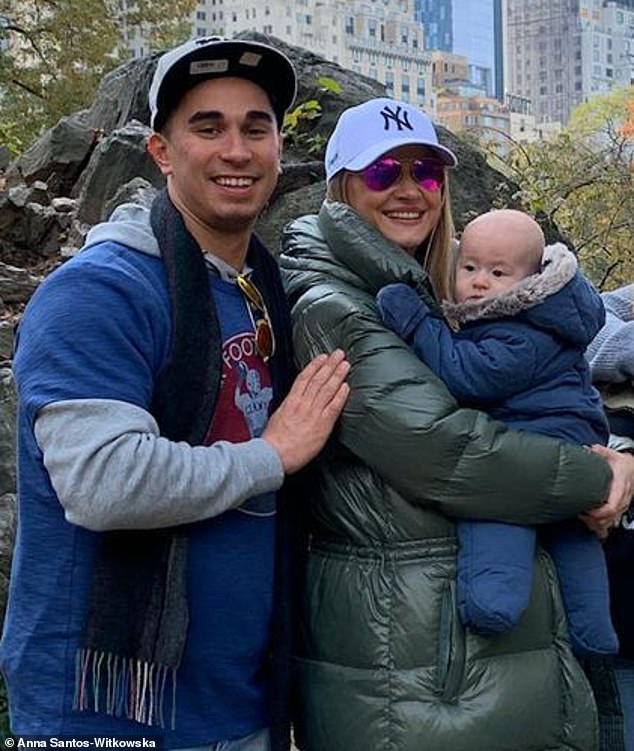 ‘When the ambulance came, the paramedics had never heard of GBS,’ Anna claims.

‘And when the doctor at the hospital was told about Oliver’s history, I also heard him say, “What’s GBS?” This just shows that even medical professionals aren’t educated enough on it.’