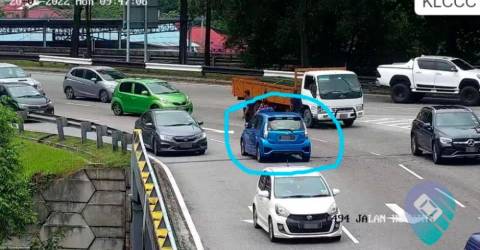 RECENTLY, an incident was reported by the Kuala Lumpur City Hall (DBKL) KL Command & Control Centre (KLCCC) that a motorist was driving against the flow of traffic.

This time, it involves a Perodua Myvi on Jalan Kuching.

In an image accompanying the tweet, the Myvi can be seen inside the Batu Caves roundabout, facing the wrong direction of traffic, with the halted vehicle blocking the middle lane and impeding traffic.

The KLCCC said in a follow-up tweet about 15 minutes later that a DBKL Renjer mobile squad that had been dispatched to the location had removed the obstacle, towing the Myvi to the side of the road.

While no one was injured this time, it isn’t always so in some cases, and there have been enough fatalities.