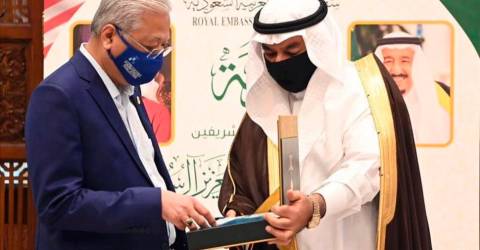 KUALA LUMPUR: King Salman Abdulaziz Al-Saud of Saudi Arabia is donating 46,000 copies of Al-Quran with Malay translation to mosques and Islamic non-governmental organisations nationwide in conjunction with Ramadan this year.

Prime Minister Datuk Seri Ismail Sabri Yaakob in a posting on Facebook today said the King, who is the Guardian of the Two Holy Mosques, is also donating 57 tonnes of dates for distribution to all Malaysians in conjunction with the holy month.

“I consider the gifts, especially Al-Quran with Malay translation, as a symbol of a very special friendship between Malaysia and Saudi Arabia, especially with Malaysia’s aspiration to uplift the status of the Malay language as an ASEAN language.

“My heartfelt thanks to King Salman Abdulaziz Al-Saud and the Government of Saudi Arabia for the gifts,” he said while expressing hope that the existing diplomatic ties between the two countries will continue to be maintained and strengthened.

Attached with the posting is a picture of the Prime Minister receiving the gifts from King Salman, which were presented by the Saudi Arabian Ambassador to Malaysia Datuk Dr Mahmoud Hussein Saeed Qattan, at his office in Putrajaya today.-Bernama