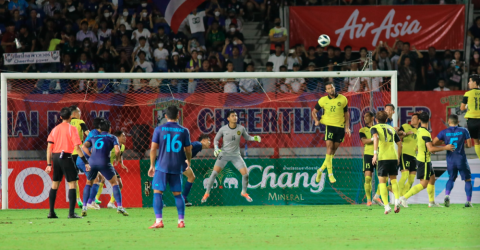 KUALA LUMPUR: Malaysia beat Thailand 5-3 on penalties after a 1-1 draw during regulation play at the 700th Anniversary of Chiangmai Stadium in Thailand yesterday, to move into the final of the 48th King’s Cup.

Malaysia who took the lead through La’Vere Corbin Ong in the 32nd minute of the first half, conceded the equalizer well into injury time of the second half through Pansa Hemviboon, a result that saw both teams walking into the pitch again to settle the outcome through a penalty shootout.

It was certainly a nail-biting penalty shootout which saw both teams eager to win, but Malaysian goalkeeper Ahmad Syihan Hazmi Mohamed had other ideas when he pulled off a spectacular save from Thai kicker Supachok Sarachat who was taking his team’s fourth penalty.

Corbin-Ong who had given Malaysia the lead and who had been the best player on the pitch throughout the match, stepped up to send the Thai keeper the wrong way to ensure victory.

In the final on Sunday, Malaysia will face Tajikistan who beat Trinidad & Tobago in the other match.

The loss was Thailand’s second consecutive defeat to Malaysia after having lost in the World Cup 2022/Asia Cup 2023 Qualifier in June last year. – Bernama