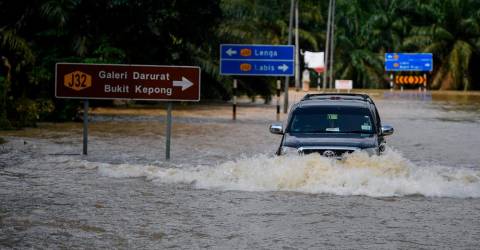 MUAR: Residents in five villages, here, can finally breathe a sigh of relief with the opening of the main route to Muar town which was impassable to traffic for the last four days.

A Bernama check together with the Pagoh Fire and Rescue Department found that the stretch in Kampung Saujana Batu 29 towards Bukit Kepong and Kampung Jawa towards Lenga found that heavy vehicles began using the road this morning after the floodwaters in the areas receded.

Although several houses in the areas were still inundated by up to two metres of floodwaters, residents have returned home to start cleaning up their houses or check their house condition.

For Mohammad Lazim Abdul Hamid, 72, the opening of the road would enable more assistance to be channelled to the affected residents.

“Even though we can’t go out to the main town, we still can receive food aid from government agencies and distribute it to other affected residents,” he told Bernama when met today.

He said floodwaters have started to subside and therefore, it was expected that floods would occur in Kampung Sabak Aur, here, in the near future.

“It is a normal occurrence and we have activated a relief centre at Sekolah Menengah Kebangsaan Bandar Maharani last Jan 1 as a precaution.

“For Muar, we have opened an operation centre at the Penghulu Mukim Lenga Complex to facilitate the distribution of food items and rescue operations in the district,” he said.