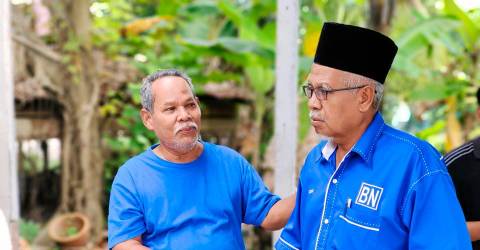 TASEK GELUGOR: The Barisan Nasional (BN) candidate contesting in the Tasek Gelugor parliamentary constituency in the 15th general election is quietly confident that the seat will be back in the coalition’s hands.

Datuk Muhamad Yusoff Mohd Noor (pix) says he has his own strategies to convince the electorate that BN remains the best choice.

However, Shahbudin left Umno to join Bersatu in 2019.

Muhamad Yusoff, who is also the assemblyman for Sungai Dua, one of the three state seats under Tasek Gelugor, said feedback and support from the people have been more than encouraging.

“In the two terms I was Sungai Dua assemblyman, I have been looking after the concerns of not only my constituents (Sungai Dua) but also the entire Tasek Gelugor as I am also UMNO division chief there.

“So far, I have met over 70 per cent of voters in Tasek Gelugor and have listened to their grievances. I now leave it to them to make their decision this Saturday,” he said.

Meanwhile, Perikatan Nasional (PN) candidate Datuk Wan Saiful Wan Jan, also believes he has the edge over his rivals based on the support received from the electorate.

“I cannot share the data though as this involves party strategy. It’s going very well which I hope will be translated into votes come polling day,” he said.