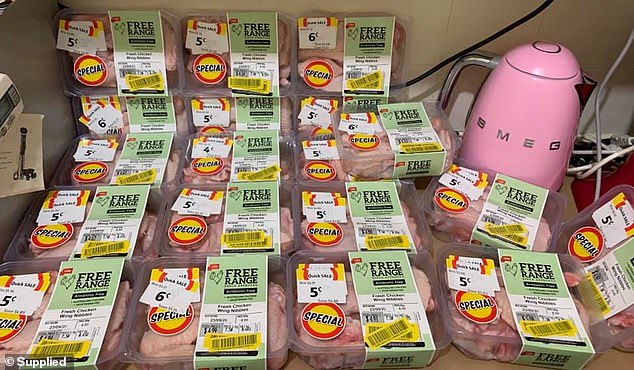 A bargain-hunting mother has bagged an enormous haul of meat and treats for just $9 at Coles.

For that price, she bought 19 packets of free range chicken wings – each reduced from roughly $5 to between 4c and 6c – along with 10 packs of Tim Tams discounted to 54c, two trays of 27c brioche buns and two 35c bottles of fruit juice.

Photos of her low-cost shop caught attention after they were shared in an Australian budgeting group on Facebook, with the mum telling members she feels ‘like a billionaire’ for scoring so much food at such a reasonable price.

But while many were impressed by her frugality, others spotted a contradiction in the corner of the photos – a bubblegum pink kettle from luxury appliance label Smeg which retails for $219.

‘Is the Smeg also on bargain (sic)?’ asked a second, while a third said buying meat on clearance was the only way to afford such upscale household accessories.

People were quick to jump to the mother’s defence, with one woman arguing she could have received the kettle as a gift.

‘How do you know she wasn’t given it or saved or months? And isn’t everyone allowed to enjoy bargains, oh my God,’ said another. 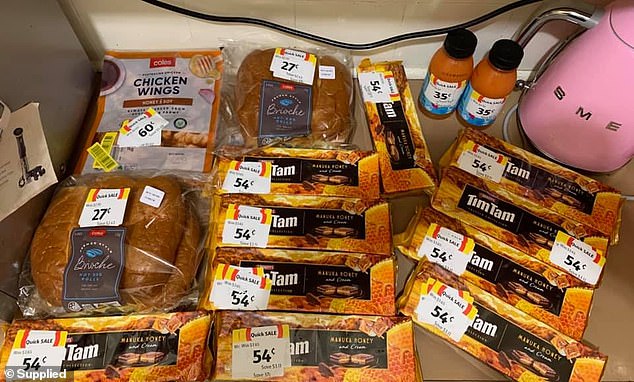 And despite some criticism, the photos also drew dozens of delighted responses praising the other’s eye for markdowns with comments including ‘great haul’, ‘omg what a massive score’ and ‘well, I’m jealous’.

‘Why doesn’t my local supermarket mark down like that?’ one woman asked.

‘Wow, that’s awesome! Good on you. In ones near me they take like five percent off max, well done,’ said another.

Others hailed the mum as a ‘bargain queen’ and said they hoped to find similar deals in the near future.