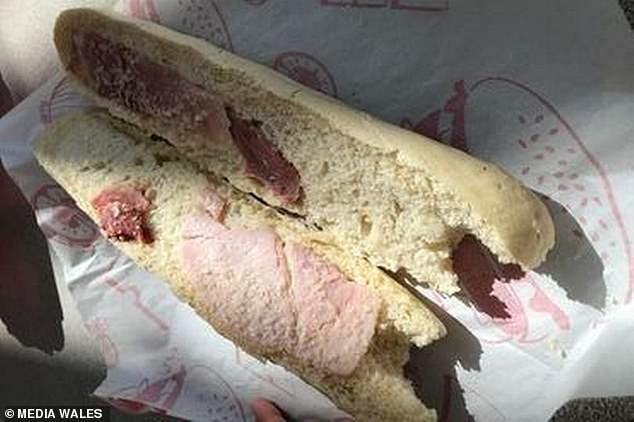 ‘Is that what my money’s paying for?’ Mum blasts school for serving her daughter a ‘basically empty’ ham baguette just days after it was forced to apologise to another pupil for serving just THREE potato wedges and beans for lunch

By Brittany Chain For Mailonline

A mum has complained about the quality of lunch her daughter received after she was served a near-empty baguette.

The 11-year-old girl sent her mother, Donna Jones, a picture of the unappetising ham baguette and wrote: ‘mum, this is my lunch.’

The pupil was served the meal at West Monmouth School in Pontypool, Wales, on September 26.

The same school was criticised earlier in the week after a different pupil was served a tiny lunch of just three potato wedges and beans.

‘There was hardly any filling in it,’ Ms Jones said.

‘I thought ”is that what my money is paying for?” I wouldn’t serve that to my children myself. I just feel that someone couldn’t be bothered and just put a tiny bit of ham in.’

The 11-year-old girl sent her mother, Donna Jones, a picture of the unappetising ham baguette and wrote: ‘mum, this is my lunch’

Ms Jones said she had been left disappointed at the standard of the offering, which she said cost between £2.50 and £3.

Although she didn’t contact the school directly, Ms Jones said she contacted Torfaen County Borough Council afterwards but had not received any response to her complaint as of this week.

‘I think school dinners are outsourced,’ she said.

‘I contacted the council and said the sandwich was basically empty and that I just didn’t think it was substantial in terms of portion size.’

Ms Jones said she told her daughter to complain but she didn’t believe she had as she was nervous having only started the new term.

‘I told my daughter she should complain about it but I don’t think she did – she is 11 and has only just started in year seven, you know?

‘School dinners are not cheap now and that’s what you’re paying for? I just want them to serve up a proper standard of food. If you’re paying for a baguette I would like a bit more care really.’

Torfaen County Borough Council declined to comment and referred media to West Monmouth School directly. The school did not respond to a request for comment.