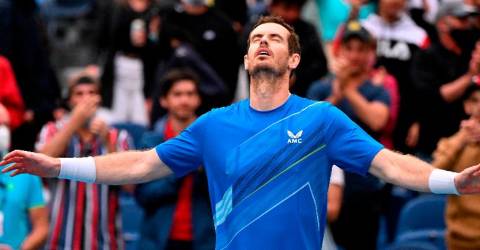 MELBOURNE: Former world No. 1 Andy Murray turned back the clock in typically combative style and favourite Daniil Medvedev set up a blockbuster second-round showdown with Nick Kyrgios at the Australian Open on Tuesday.

In the women’s draw, top-10 seeds Garbine Muguruza, Iga Swiatek and Anett Kontaveit all made comfortable starts to their Melbourne title charges, while Simona Halep and Aryna Sabalenka also won despite struggling with their serves.

Emma Raducanu, the US Open champion, was also victorious on her tournament debut but there was defeat at the first hurdle for her fellow 19-year-old Leylah Fernandez – the woman Raducanu beat in the Flushing Meadows decider.

Canada’s Fernandez, the 23rd seed, went down 6-4, 6-2 to Australian wildcard Maddison Inglis, to the delight of the home crowd.

After Sunday’s deportation of men’s defending champion and top seed Novak Djokovic, the first Grand Slam of the year is now in full swing and many are eager to move on from the visa saga.

That is easier said than done and Tennis Australia (TA), organisers of the so-called “Happy Slam”, said in a statement Tuesday that they “deeply regret the impact” it has had on the other players.

“As the Australian tennis family, we recognise that recent events have been a significant distraction for everyone,” TA said, without mentioning Djokovic by name.

If it has been a distraction for Murray, he did not show it.

The 34-year-old, there as a wildcard, showed all the fighting qualities that made him a three-time Grand Slam champion.

His epic five-set victory over 21st seed Nikoloz Basilashvili was hugely symbolic – the Briton departed Melbourne Park in 2019 not knowing if he would ever be back because of hip trouble.

But here he was, rolling back the years and heading into round two.

“It’s amazing to be back and winning a five-set battle like that, I couldn’t ask for any more,” said Murray.

There was no such problem for Russia’s Medvedev, the second seed and favourite to lift his second major, who made light work of 91st-ranked Henri Laaksonen on Rod Laver Arena, dismantling the Swiss 6-1, 6-4, 7-6 (7/3).

With Djokovic out of the picture and Roger Federer not in Melbourne because of injury, the draw has opened up for the 25-year-old Medvedev and Spanish great Rafael Nadal.

Medvedev, who lost last year’s final in Melbourne to Djokovic but then beat the Serbian in the US Open final in September, plays combustible but talented Australian showman Kyrgios in round two.

Another of the “Next Gen” young talents challenging the “Big Three” of Djokovic, Nadal and Federer is Greece’s Stefanos Tsitsipas.

The fourth seed was a comfortable winner in three sets over practice partner Mikael Ymer to get his tournament up and running.

There was also little trouble for Kontaveit, despite some early nerves, and Swiatek, but Romania’s Halep was far from comfortable.

The former No. 1 laboured into round two 6-4, 6-3 after an error-strewn clash with Poland’s Magdalena Frech which saw 11 service breaks.

Second seed Sabalenka, who was reduced to tears and serving underarm in a disastrous lead-up to Melbourne, had Mark Philippoussis to thank after she revealed the Australian former world No. 8 helped iron out some of her serving problems.

In the last action of the day, Raducanu ousted the American Sloane Stephens – a former US Open champion – 6-0, 2-6, 6-1 in a performance that will make the Briton’s rivals sit up and take notice. – AFP