Mysterious gamma rays emanating from the center of our galaxy could be dark matter, scientists say

By James Pero For Dailymail.com

Elusive dark matter could be the key to unexplained gamma rays observed coming from the center of our galaxy.

In a new paper published by physicists from MIT, researchers say that previous models ruling dark matter as the source of gamma rays may have a critical flaw.

‘If it turns out that the signal is dark matter, that’s huge for our understanding of the universe,’ Rebecca Leane, postdoctoral researcher in the Center for Theoretical Physics at MIT, told Gizmodo.

‘We know that dark matter makes up most of the universe, but we don’t have much of an idea of what it is… if there’s a dark matter signal, that would have a massive impact, and getting to the bottom of it would be very interesting.’

Since 2009 researchers have observed the gamma rays coming from the center of the Milky Way and eventually landed on a cause seven years later in 2016.

A tandem of papers suggested that a rapidly spinning neutron star called a pulsar was to blame for the strange rays, despite speculation that colliding dark matter may also be a candidate.

Since then, a pulsar has become the going hypothesis among scientists.

The newest research, however, suggests that previous calculations may have a critical flaw that brings dark matter back into the equation.

According to them, a previous mode called the non-Poissonian template fitting which is used to pinpoint points of light in the sky may have confused light sources as coming from a pulsar.

They did this by simulating gamma rays emitted from dark matter using the model which turned up as a pulsar or star-like object.

‘This suggests that the data are mis-modeled in some way, and that dark matter may be the dominant contribution to the galactic center excess after all—though this does not constitute positive evidence for dark matter, and the [excess] could still be composed mainly of point sources,’ the authors wrote in a their paper. 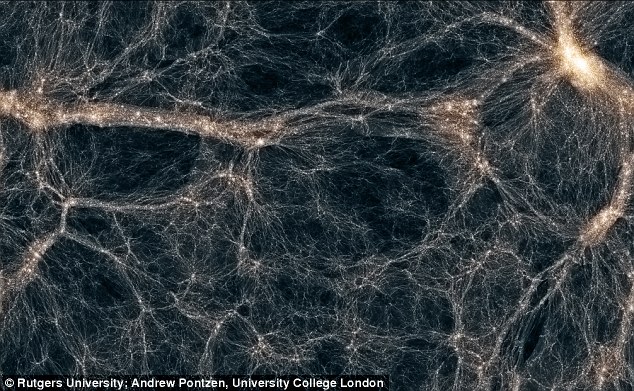 As reported by Gizmodo, authors of the 2016 study suggesting a pulsar was the likeliest cause have even admitted that the flaws identified by recent studies warrant further study.

‘It is very important to carefully assess the uncertainties involved in any search for dark matter, especially one focusing on gamma rays from the Milky Way’s galactic center,’  Mariangela Lisanti, a Princeton professor who worked on the 2016 paper told Gizmodo in an email.

Though Lisanti says the newest findings aren’t enough to rule out pulsars, researchers say dark matter has been entered back into the running.

WHAT IS DARK MATTER?

Dark matter is a hypothetical substance said to make up roughly 27 per cent of the universe.

The enigmatic material is invisible because it does not reflect light, and has never been directly observed by scientists.

Astronomers know it to be out there because of its gravitational effects on known matter.

The European Space Agency says: ‘Shine a torch in a completely dark room, and you will see only what the torch illuminates.

Dark matter is a hypothetical substance said to make up roughly 27 per cent of the universe. It is thought to be the gravitational ‘glue’ that holds the galaxies together (artist’s impression)

‘That does not mean that the room around you does not exist.

‘Similarly we know dark matter exists but have never observed it directly.’

The material is thought to be the gravitational ‘glue’ that holds the galaxies together.

Calculations show that many galaxies would be torn apart instead of rotating if they weren’t held together by a large amount of dark matter.

Just five per cent the observable universe consists of known matter such as atoms and subatomic particles.