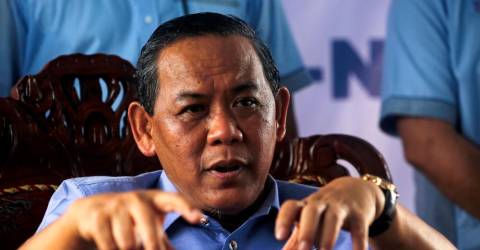 SEREMBAN: The Negeri Sembilan Pakatan Harapan (PH) government is prepared to face the 15th General Election (GE15) including the possibility of an earlier dissolution of the State Legislative Assembly.

Menteri Besar Datuk Seri Aminuddin Harun (pix) said this took into consideration the possibility of GE15 taking place after the tabling of Budget 2023 this year.

“This is close to the end of the State Legislative Assembly’s current term which will end in the middle of next year.

“If there is a General Election at that time, for instance, in November which is close to the end of our term, the state government will consider and decide.

“The six states will discuss and jointly decide whether the state election will be held simultaneously with the federal election,” he told reporters after a State Executive Council meeting, here, today.

However, Aminuddin opined that GE15 should not be held now so as to focus on tackling the problems faced by the people, especially the rising cost of living.

“I hope it will be at the end of the term after we’ve assisted the people, then we leave it to them in respecting democracy. We don’t want the people to feel disappointed and when come the General Election, they don’t go out to vote,“ he said.

In March, Aminuddin reportedly said that six states including Negeri Sembilan were expected not to dissolve their respective Legislative Assembly if GE15 were to be held soon.

The GE14 in 2018 saw Negeri Sembilan, Penang and Selangor ruled by PH while Kelantan, Terengganu and Kedah came under PAS. — Bernama