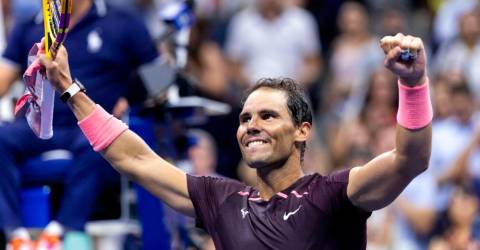 The 36-year-old Spaniard, who is chasing a 23rd Grand Slam title and third of 2022, next faces Fabio Fognini.

Nadal holds a 13-4 career lead over the Italian but Fognini famously defeated him from two sets down in the third round of the US Open in 2015.

“I’m very happy to be back. It’s a long time that I played here. I thought that maybe I’d never be back,“ said Nadal whose last appearance in New York saw him win the 2019 title.

World number three Nadal came into this year’s tournament under an injury cloud after an abdominal strain had forced him to forfeit his Wimbledon semi-final against Nick Kyrgios.

Before Tuesday, he had played just once, a first-up loss to Borna Coric in Cincinnati and he looked rusty at the start on Tuesday.

Hijikata, making his Grand Slam debut, surprisingly broke for a 4-3 edge and claimed the opener in the 10th game on the back of 11 fearless winners.

However, Nadal was quickly back in business with breaks in the second and eighth games of the second set bringing him level in the contest.

A break in the fourth game of the third for a 3-1 lead was enough to secure a two sets to one lead.

He wrapped up the tie on a fifth match point, sealing the victory with searing forehand pass to progress in a tournament missing his longtime rival Novak Djokovic who was banned from the US over his refusal to be vaccinated. – AFP