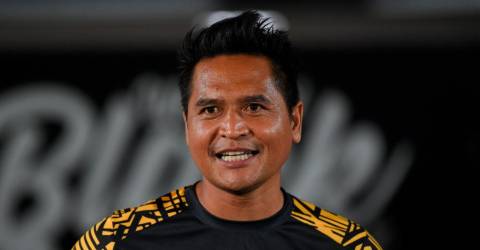 KUALA NERUS: Terengganu FC (TFC) head coach Nafuzi Zain(pix) admitted that he is finding it difficult to determine the starting line-up for the FA Cup final at the Bukit Jalil Stadium this Saturday.

This is because all the players are at their best and ready to play in the match against powerhouse Johor Darul Ta’zim (JDT).

In fact, according to Nafuzi, his close relationship with his men also made things complicated as he did not want to go wrong in picking the squad as most of the players have no experience of playing on such a big occasion and are looking forward to it.

“As a former player myself, I fully understand their passion and desire to play in the final. What’s more, this opportunity has come after 11 long years.

“This is one of the most difficult situations I have faced, but decisions have to be made even when they are difficult. I hope all the players accept it with an open heart and support their teammates for mutual success,“ he said when met at the team’s training session in Gong Badak here last night.

Nafuzi said that for the final, he most likely will not make many changes to the main squad that has always been fielded in previous matches.

However, he said, the coaching staff were still testing some new combinations of players to adapt to the pattern of the match against the Southern Tigers.

“For import players, we have six. One of them have to be sacrificed to meet match rules.

“This selection is of course difficult, but I consider it positive because there will be many choices of players to face the Southern Tigers who are no easy meat,“ he said.-Bernama