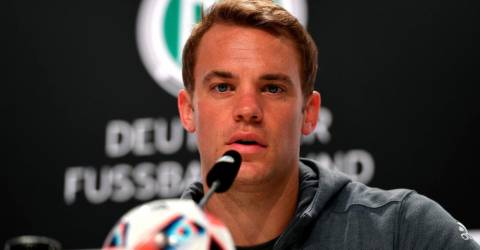 BERLIN: Bayern Munich manager Julian Nagelsmann said on Friday he does not know when captain Manuel Neuer (pix) will return from a shoulder injury, as the goalkeeper’s World Cup prospects appear in serious doubt.

Germany’s Neuer last played for Bayern on October 8 in their 2-2 away draw against Borussia Dortmund.

“I don’t know because I’m not a clairvoyant,“ Nagelsmann told reporters when asked when Neuer would return.

“I’m not assuming he won’t be able to play at the World Cup. I’m firmly assuming he will – but I’m not a clairvoyant.

“If he still has persistent pain in five weeks, then he won’t play in it.”

Germany play their first match at the Qatar World Cup against Japan on November 23.

Nagelsmann said he hoped the 36-year-old’s “stupid shoulder” would heal soon enough for him to play at Hertha Berlin in just over a week’s time.

“We would like him to play again as soon as possible. We are working so he can come back the weekend of next week, but I don’t know.”

Nagelsmann backed Neuer’s replacement Sven Ullreich to continue to step up in his absence.

“Ulle (Ullreich) is doing incredibly well. Manu is the best goalkeeper in the world, but all the boys have a lot of trust in Ulle.”

In addition to the absence of the 113-time capped Neuer, Bayern – who have five more games to play before the World Cup break – will be missing Thomas Mueller, Leroy Sane and Lucas Hernandez for this Saturday’s clash at home against Mainz.-AFP