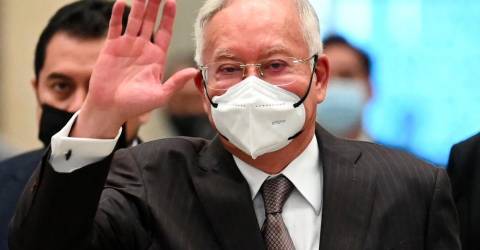 KUALA LUMPUR: The High Court here today was told that former Prime Minister Datuk Seri Najib Tun Razak had two credit cards with a combined limit of RM3 million, believed to be one of the highest credit limits ever given by AmBank.

“The average customer had a RM50,000 credit limit per card but for Datuk Seri Najib, the bank had given him the RM3 million limit for both cards.

“I believe these combined limits are one of the highest credit limits given by AmBank. The cards were both cancelled in March 2015,” he said during the examination-in-chief by deputy public prosecutor, Nadia Mohd Izhar at the Pekan MP’s trial over the misappropriation of RM2.3 billion in funds from 1Malaysia Development Berhad (1MDB).

Further questioned by Nadia, the 35th prosecution said among the transactions made by Najib were at a hotel in Italy, The Westin Excelsior R Roma on July 21, 2011 for a sum of RM98,013.63.

During cross-examination by Najib’s lawyer, Wan Aizuddin Wan Mohammed, Yeoh said normally the bank would award the credit limit to customers based on their income capacity.

Wan Aizuddin: Will the bank look at the criteria of whether he’s a corporate figure or a head of government in considering the credit limit to be given? What if a customer is a long-standing customer of the bank?