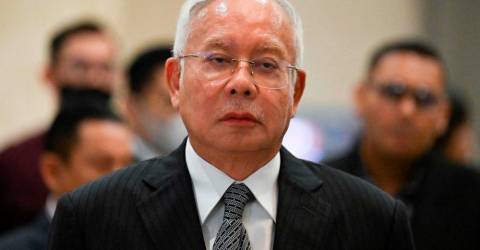 The 42nd prosecution witness said this when cross-examined by senior deputy public prosecutor Datuk Seri Gopal Sri Ram at the trial of the former premier over the misappropriation of RM2.3 billion in funds from 1MDB.

Queried by Sri Ram whether he had informed Najib that 1MDB and Shahrol Azral were allegedly uncooperative in the past towards the Finance Ministry, Mohd Irwan said he did so after parliamentary watchdog, the Public Accounts Committee (PAC), released its findings on 1MDB in 2016.

Mohd Irwan said he went to see Najib and told him about the three recommendations of the PAC, namely to restructure 1MDB, to pay the debt and to charge the two fellows (Shahrol Azral and Lodin).

Sri Ram: You told him they needed to be charged?

Mohd Irwan: Yes, so that’s it.

Najib, 69, is facing four charges of using his position to obtain bribes amounting to RM2.3 billion of 1MDB funds and 21 charges of money laundering involving the same amount.