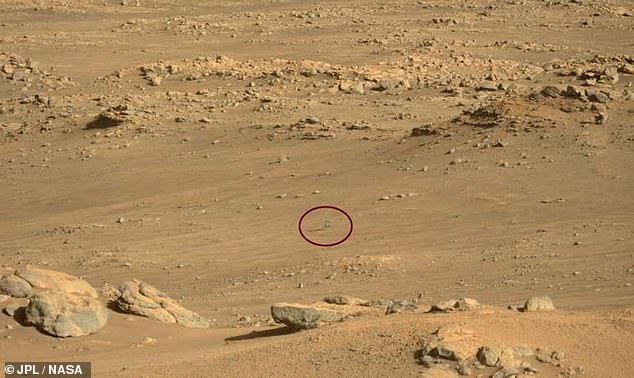 NASA‘s Mars helicopter has completed its 17th flight on the Red Planet, despite only being designed for five such missions.

Ingenuity, the first aircraft to operate from the surface of another world, took off for a 117-second trip as it inches closer to its original airfield, where it’ll await the arrival of the US space agency’s newest rover.

Perseverance is currently exploring the South Séítah region of Mars’ Jezero Crater as it searches for ancient microbial life on the Red Planet.

The Mars helicopter’s latest flight on December 5 takes its total amount of airtime to 30 minutes and 48 seconds.

This far surpasses the original plans for the 4-pound (1.8-kilogram), 18-inches tall rotorcraft, which was due to complete up to five test flights on the Red Planet. 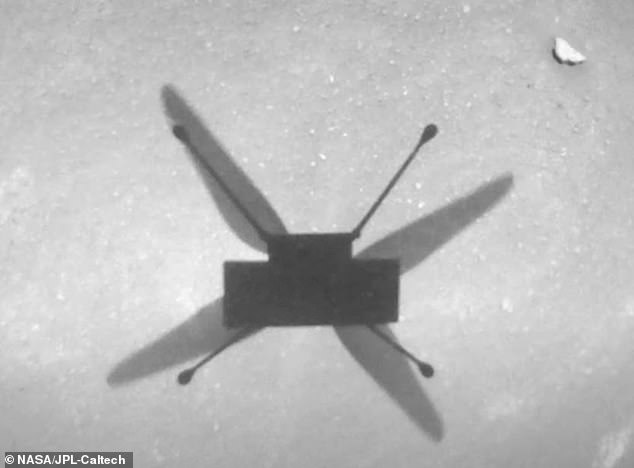 Ingenuity, the first aircraft to operate from the surface of another world, took off for a 117-second trip as it inches closer to its original airfield, where it’ll await the arrival of the US space agency’s newest rover

Flight one: April 19, 2021 with a vertical takeoff up to 9.8ft, stationary hover and a landing

Flight two: April 22, 2021 with a vertical takeoff up to 16ft, hover, then shift westward for 14ft before returning and landing

Flight three: April 25, 2021 with a vertical takeoff up to 16ft, hover, shift northwards for 328ft at an airspeed of 2 m/s before returning to land

Flight nine: July 5, 2021 with a record length of 2,050ft southwest over a prospective research location at 16ft per second.

Flight eleven: August 5, 2021 by flying 1,250ft for 130 seconds in preparation for a series of reconnaissance missions for the Perseverance rover.

Flight Thirteen: September 5, 2021 by flying 690ft for 160.5 seconds, climbing 26ft over one particular ridgeline over the ‘South Seitah’ region of Mars.

Flight Fifteen: November 6, 2021 by flying back towards its original landing site. It flew for a total of 128 seconds at an estimated 11mph.

Flight Seventeen: December 5, 2021 by flying back toward the Wright Brothers Field at the Octavia E. Butler landing site. It flew 614ft (187m) for a total of 117 seconds at an estimated 6mph.

It arrived on Mars attached to the belly of Perseverance, which touched down on Mars on February 18 after a nearly seven-month journey through space.

Ingenuity then performed its historic first flight on April 19, 2021, making history as the first powered controlled flight on any planet other than Earth.

In a nod to this feat, Ingenuity carries a small amount of fabric that covered one of the wings of the Wright brothers’ aircraft, known as the Flyer, during the first powered, controlled flight on Earth in 1903.

After proving that flight was possible, the helicopter made four further trips, each one increasingly longer and with more complicated maneuvering, as engineers at the Jet Propulsion Laboratory (JPL) looked to better understand its performance.

‘Few thought we would make it to flight one, fewer still to five.

‘And no one thought we would make it this far,’ said Ingenuity team lead Teddy Tzanetos of JPL.

‘On the way to accumulating over a half-hour aloft Ingenuity has survived eight months of bitter cold, and operated out of nine unique Martian airfields.

‘The aircraft’s continued operations speaks to the robustness the design and the diligence and passion of our small operations team.’

During Ingenuity’s 17th flight there was an unexpected cut-off to the in-flight data stream as the helicopter descended toward the surface.

Although Perseverance serves as the helicopter’s communications base station for engineers on Earth, it wasn’t able to provide the JPL team with enough information to declare the flight a success at the time.

They had to wait for separate data to be downlinked to JPL’s base in California last Friday (December 10), which confirmed the mission had been a success and that Ingenuity was in excellent condition.

The helicopter did not have long to wait for its next flight, which was scheduled to take place no earlier than yesterday (December 15).

NASA has not yet released any details about whether or not it has taken place.

Just like with flight 17, number 18 will also push the limits of the rotorcraft’s radio range and performance.

The JPL team have modified the flight sequence to communicate in a low-data-rate mode, which they hope will provide an additional signal-strength boost and offer the best chance of maintaining a radio link throughout the landing.

‘If we do lose radio link on landing, it may be several days or weeks until the line-of-sight between Ingenuity and Perseverance improves enough to attempt a communication session,’ said Tzanetos.

‘While delaying our post-flight data analysis is an inconvenience, it is not unexpected and becoming the new normal as we continue to operate in challenging terrain in the weeks ahead.’ 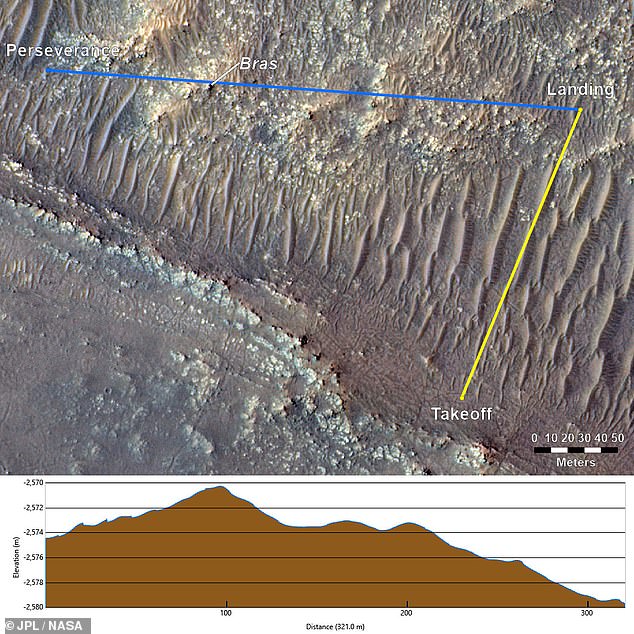 Ingenuity flew 614ft (187m) for a total of 117 seconds at an estimated 6mph. It is heading back to the Wright Brothers Field at the Octavia E. Butler landing site, to meet up with Perseverance 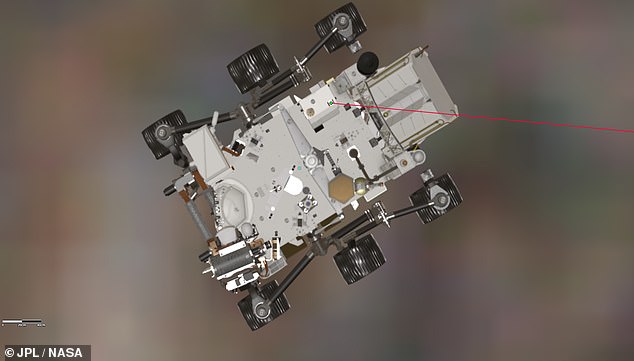 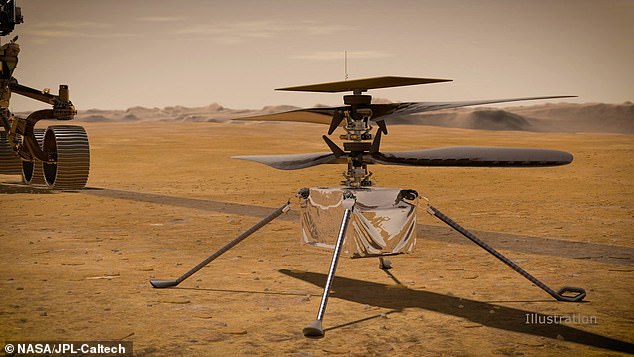 Ingenuity (pictured in an artist’s impression) is currently acting as a scout for the Perseverance rover, which is searching for ancient microbial life on the Red Planet

Ingenuity is travelling back to the Wright Brothers Field at the Octavia E. Butler landing site.

It is currently acting as a scout for the Perseverance rover, which is collecting samples set to be returned to Earth by the early 2030s.

Perseverance made its first test drive on Mars on March 4, and on April 4, NASA confirmed that Ingenuity had been dropped to the surface of Mars from Perseverance’s ‘belly’ in preparation for its historic flight.

While airborne, Ingenuity keeps track of its motion using an onboard inertial measurement unit (IMU), which tracks acceleration and rotation rates.

By integrating this information over time, it is possible to estimate where it is, how fast it is moving, and how it is oriented in space.

The onboard control system reacts to the estimated motions by adjusting control inputs rapidly – at a rate of 500 times per second.

NASA MARS 2020: PERSEVERANCE ROVER AND INGENUITY HELICOPTER ARE SEARCHING FOR LIFE ON THE RED PLANET

NASA’s Mars 2020 mission was launched to search for signs of ancient life on the Red Planet in a bid to help scientists better understand how life evolved on Earth in the earliest years of the evolution of the solar system.

Named Perseverance, the main car-sized rover is exploring an ancient river delta within the Jezero Crater, which was once filled with a 1,600ft deep lake.

Perseverance landed inside the crater and will slowly collect samples that will eventually be returned to Earth for further analysis.