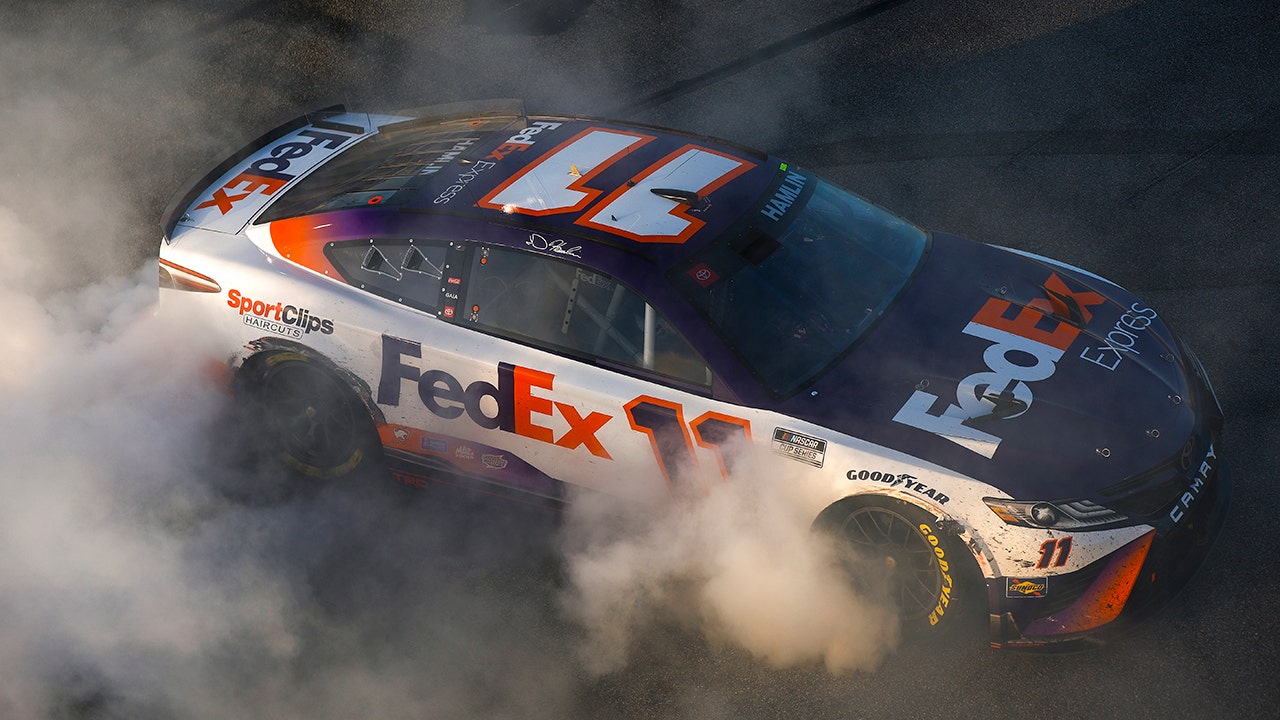 Denny Hamlin ran down William Byron with five laps to go Sunday and ended the slowest start to his career with a victory in the Toyota Owners 400 at Richmond Raceway.

In a race that featured four sets of green-flag pit stops and a whole lot of tire strategy, Hamlin closed a huge gap between Byron and teammate Martin Truex Jr., passing Truex on the outside and Byron shortly thereafter. He then held off a challenge from Kevin Harvick, a three-time winner at Richmond.

“Yeah, just great strategy there. Just drove as hard as I could,” Hamlin said after climbing from his car, crediting his team for not giving up. “There was no doubt in my mind, maybe just a little, but they got this car right there towards the end. Wow, unbelievable.”

The win was Hamlin’s first of the 2022 season.
(Jared C. Tilton/Getty Images)

Hamlin’s 47th career victory was his first at his hometown track since 2016, the first for Toyota in the Next Gen car and gave NASCAR seven different winners in seven races. Harvick was second, followed by Byron, Truex and Kyle Larson.

“Had a shot there at the end,” Harvick said. “I wanted to be close enough with the white to just take a swipe at him. Yeah, the lapped cars there kind of got in the way and I lost a little bit of ground.”

Hamlin got himself into contention during the second stage when he and Joe Gibbs Racing teammate Christopher Bell opted to stay on the track while most of the rest of the field pitted for tires. The move initially gave the risk-takers a sizable lead, but one that began evaporating quickly.

Hamlin made it pay off in the final stage, going from 15th to seventh over just a few laps after a restart using the extra set of tires he had over the field.

Byron, meantime, declined to pit from the big lead he held with just over 50 laps to go, but Truex eventually got to his rear bumper and then Hamlin passed them both for his first top 10 finish of the season. He also snapped a string of 12 consecutive race winners under 30.

Kyle Busch, the fourth JGR team member, was black-flagged with about 50 laps to go when NASCAR noticed a piece of tape on his grille. At the time, his three teammates were running in the top 10 and he was closing in on joining them. He finished ninth.

All three of NASCAR’s top series will be in Virginia again next weekend with a Truck-Xfinity-Cup series tripleheader scheduled at Martinsville Speedway.