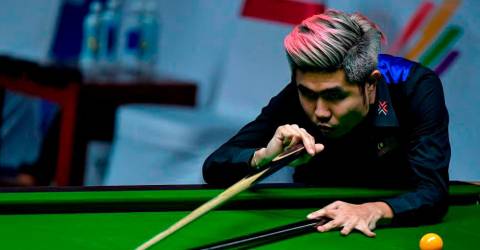 KUALA LUMPUR: National snooker players have been urged to join the National Sports Council (NSC) training programme full time to enable them to have access to the training allowance offered.

NSC Athletes Training Division director Jefri Ngadirin said he once asked snooker players to join the programme but they turned down the offer because of work commitments.

“We understand they work full time. They have to answer to their employers and some have their own businesses. So they can’t meet the requirements of the full-time programme here (NSC). That is the main issue facing the sport of snooker and billiards,“ he told reporters after the 2023 Cambodia SEA Games Phase 1 Athletes Assembly here today.

Even though snooker players were unable to join the programme, Jefri said, NSC had never marginalised them and had even given the sport funding since 2017, including for three editions of the SEA Games and the World Amateur Snooker Championship 2022 in Antalya, Turkiye.

Jefri said Kok Leong is eligible to receive the Sports Victory Prize Scheme Incentive (SHAKAM) after his success in Turkiye.

Jefri NSC had included a proposal to provide an allocation to the Malaysian Snooker and Billiards Federation (MSBF) for the 27-year-old Kok Leong to participate in more competitions next year. – Bernama