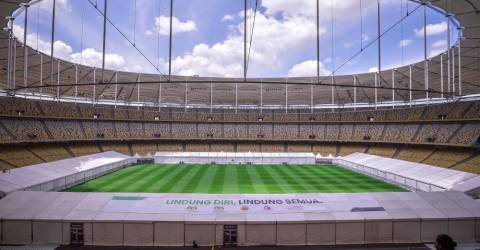 KUALA LUMPUR: The Youth and Sports Ministry (KBS) does not want further delay to restore the National Stadium in Bukit Jalil after the quality of the pitch became a hot topic during the 2023 Asian Cup Qualifiers going on now.

Its minister, Datuk Seri Ahmad Faizal Azumu said the stadium would be closed from tomorrow (June 15) for restoration works to start immediately, compared to initial plans to close at the end of March 2023.

“KBS views the quality of the field as well as the National Stadium facilities seriously and we cannot continue to put the country’s dignity in jeopardy by delaying the appropriate actions.

“The quality of the pitch as well as facilities should be handled fast and comprehensively. The current condition needs quick action and the situation is very pressing and should not be delayed,” he said in a statement today.

Malaysia is organising the Group E qualifying round of 2023 Asian Cup at the National Stadium which began on June 8 when Bahrain crushed Bangladesh 2-0, while Harimau Malaya trounced Turkmenistan 3-1.

Nonetheless, the poor quality of the field with stagnated water emerged after a heavy downpour before the start of the second match between Malaysia who are ranked 154th against world number 89th, Bahrain on Saturday (June 11) which sparked the dissatisfaction among several parties

It was even more embarrassing when several workers were seen trying to scoop stagnant water from the surface of the field manually before the start of the match in the full view of spectators which tarnished the country’s image at an international stage.

In the last group matches today, Bahrain are scheduled to meet Turkmenistan, while Harimau Malaya would face Bangladesh.

In March, the Tunku Mahkota of Johor (TMJ) Tunku Ismail Sultan Ibrahim, who is also the owner of Johor Darul Ta’zim (JDT) said he would sponsor the cost of planting new grass at the National Stadium as a gift to the home ground of Harimau Malaya.

In a statement on Johor Southern Tigers Facebook, he said the Zeon Zoysia grass to be planted is similar to Sultan Ibrahim Stadium field owned by JDT in Iskandar Puteri, Johor.-Bernama