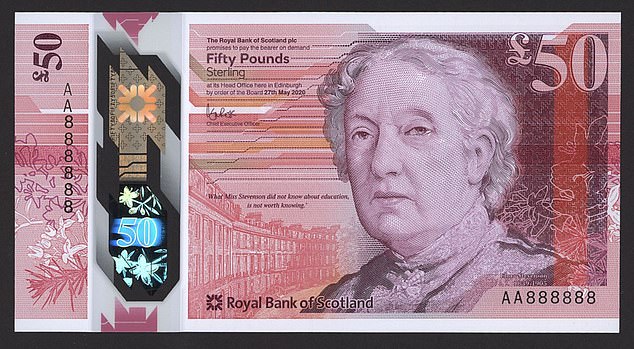 Some of the rarest and most collectable banknotes held by NatWest are set to go up for auction, with the proceeds being given to charity.

Hundreds of notes will go under the hammer with a face value of around £21,000 but leading auctioneer of collectable banknotes, Spink, estimates that the auctions could raise over £400,000.

Some of the most collectable notes are also the newest and are estimated at £1,800 each.

For example, a never-circulated Royal Bank of Scotland £50 polymer note with the serial number AA888888 featuring Flora Stevenson and Randolph Crescent in Edinburgh has a top estimated value of £1,800.

A never circulated Royal Bank of Scotland £50 polymer note with the serial number AA888888  has a top estimated value of £1,800

Notes with low serial numbers are also desirable for collectors, and the majority of these notes are set to raise around ten times their face value.

Some of the more historic notes date back over 100 years to the First World War and include a Bank of England 10 Shilling note from 1919.

The first of three auctions is being held on 29 November 2022 with the proceeds donated to the Trussell Trust, whose network of more than 1,300 food bank centres supports people across the UK who are unable to afford the essentials.

Another sale will be held on 16 December 2022, with a further auction planned for 19 January next year.

All auctions will be held at Spink’s headquarters on Southampton Row in London. 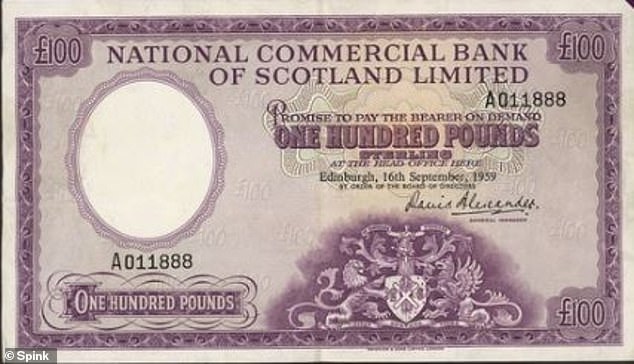 Although banknote collecting may not be as popular as stamp or coin collecting, it still has a huge following worldwide.

Bank notes that are unique and rare are typically the most sought after. This could relate to a sought after serial number, certain imagery or a historical context.

Arnas Savickas, head of banknotes in Europe and the USA at Spink says: ‘Expensive and collectible banknotes are usually expensive because they are scarce and they have some historical heritage. 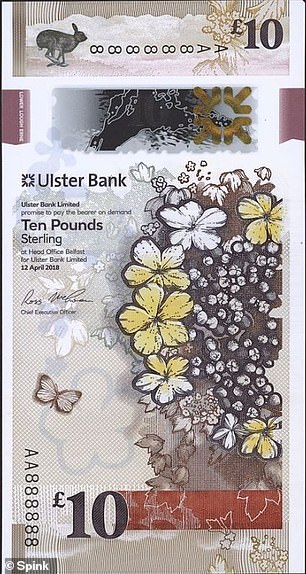 ‘For example, Palestine banknotes or Zanzibar banknotes, or Hijrah’s banknotes because Hijrah was invaded and is now Medina and almost all its banknotes were destroyed. So they are extremely rare and that’s why they are expensive.’

The condition of the bank note is also important. Flawless uncirculated banknotes are usually worth more than their circulated counterparts, according to auctioneer, Warwick & Warwick.

‘Well-centered notes’ also tend to be of greater value, due to their greater desirability among collectors.

Damage, or minor flaws, will cause value to drop. The bigger the damage, the greater the loss.

Some banknote collectors also target specific styles or images. These could be animals or buildings and landmarks for example.

Savickas adds: ‘It could be a bank that has special design features that makes it desirable.

‘It could be there is a special feature or design of the banknote. For example, someone might want to collect all the bird series on the banknotes that they can get their hands on.’

What’s special about the NatWest auction?

What makes the banknotes selling at NatWest auction more rare is the serial numbers, according to Savickas.

Most British banknotes have a standard six-digit serial number.

Some banknote collectors are keen to get their hands on notes with unique or appealing serials.

‘There’s low serial numbers, says Savickas, ‘It starts at four and goes to what we call solid numbers, meaning all serial numbers are made up of one number. For example, there’s eight digits of one.

‘They are real banknotes, but they either have cancellations or serial numbers as zero and that’s very collectible because it is very rare.

‘For these RBS notes being sold at auction, the specimens will be only available from these sheets. So if someone wants a specimen they will have to get that sheet.’ 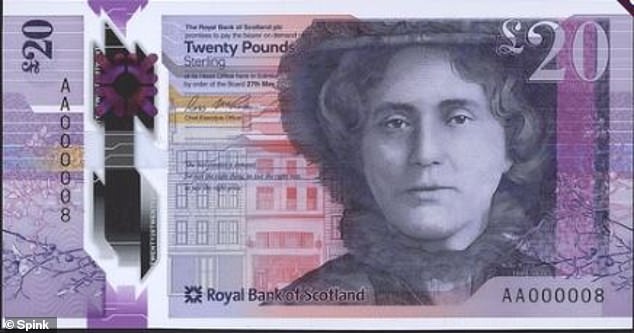 An uncirculated Royal Bank of Scotland polymer £20 note, printed on 27 May 2019, with a serial number AA000008, showing the Scottish Entrepreneur Catherine ‘Kate’ Cranston. It is estimated to be worth £500-£700

Do your homework before collecting

Banknote collecting is more a hobby than an investment, so for anyone thinking about getting started, it’s important to bear that in mind.

That said, like anything that has a finite supply, there is a chance of values rising over time.

‘I would not advise anyone to put all their money into collecting banknotes as way of investing,’ says Savickas, ‘just like I wouldn’t advise them to put all of their savings into crypto.

‘But if I would make just an opinion based historical observation, then yes, anything that is fixed in supply usually rises in value over time – at least in line with inflation.

‘Over medium to long term bank notes have remained fairly consistent with inflation.’

However, rather than focus on potential profits, Savickas advises it’s best to focus on enjoying the new-found hobby. But just make sure you do your homework first.

‘Ultimately do your research and do not buy anything impulsively,’ he adds.