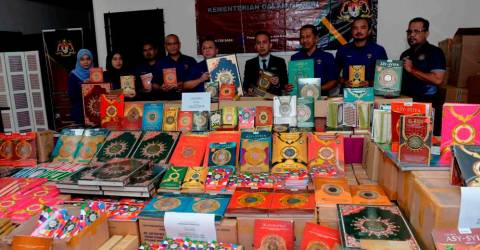 SHAH ALAM: Some 3,823 copies of the Quran, as well as materials and other publications on the Quran, estimated to be worth RM110,221.19, mostly from Indonesia were seized in an operation, code-named “Op Naskhah” conducted in Selangor since last Oct 1 until yesterday.

The seized materials were found without the approval of the Quran Printing Control and Licensing Board (LPPPQ) and the Lajnah Tashih al-Quran.

“The seizure also included copies of the transliteration of the Quran in Roman Script which is not allowed in Malaysia and has been declared illegal by the National Fatwa Committee,“ he told a press conference here today.

He said the transliteration of the Quran in Roman Script was sold actively online for between RM40 to RM100 depending on the size.

Ahmad Hilmi said the division will continue to carry out checks at the country’s entry points, including Kuala Lumpur International Airport (KLIA), Port Klang, and Sultan Abdul Aziz Shah Airport, Subang, as well as shops selling publications on the Quran.

He also urged the public to channel information on the sale of Quranic publications that were not approved by the Home Ministry to 03-55190349 or Instagram @pkkselangorkdn as well as its official Facebook.-Bernama