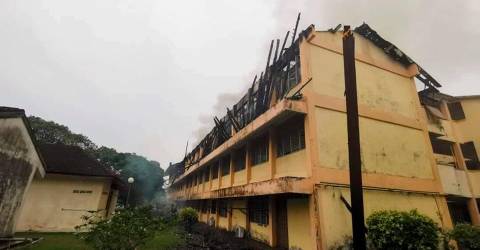 Menteri Besar Datuk Seri Aminuddin Harun said the clean-up work at the school’s building can only be carried out after the school authorities receive a full report on the fire from the Fire and Rescue Department.

“The school authorities are seeking the state government’s help in the clean-up work as the building next to it (the block that was razed) has to be used. The repair work on the affected building needs to be expedited because the students need dormitory facilities,“ he told reporters after visiting SMKA Dato’ Haji Abu Hassan Haji Sail, in Pedas near here.

Aminuddin said the 90 students who were affected by the fire also received RM300 each as items such as school uniforms were destroyed in the incident.

In the meantime, he said that school buildings over 10 years old should be monitored more often by the authorities so that students and teachers can carry out more conducive and safe learning sessions.

Earlier, the media had reported that the 80 per cent of boys’ dormitory had been razed in the fire yesterday afternoon. There were no casualties in the incident.

The fire involved the boys’ dormitory on the third floor which had about 10 rooms and covered an area of 40×200 per square feet.

Following the fire, more than 600 students at the school will be undergoing the home-based teaching and learning (PdPR) method for now.