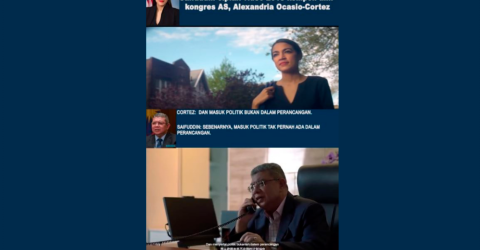 INCUMBENT Indera Mahkota MP Datuk Seri Saifuddin Abdullah has caught netizens’ attention after the release of his campaign video which was accused of a “copy” of video produced four years ago by an American politician.

TikTok account @tenteratrollkebangsaan made a comparison of both videos.

The video was recorded in Malay and played as a voiceover in the video, is just like the one in English by New York lawmaker Alexandria Ocasio-Cortez, who promoted the video during her US Congress election campaign.

In the accompanying caption, the uploader alleges that Saifuddin “ciplak” or plagiarised the US congresswoman’s video from 2018.

Many netizens expressed amusement at Saifuddin’s script, saying he basically says the same line, but in Malay.

Saifuddin is defending his Indera Mahkota seat in GE15 in a four-cornered fight. He is up against Barisan Nasional’s Quek Tai Seong, Pakatan Harapan’s Zuraifi Ismail, and Pejuang’s Dr Mohamad Nor Sundari.