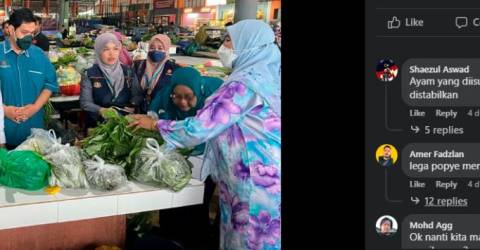 MINISTER in the Prime Minister’s Department (Economy) Datuk Seri Mustapa Mohamed was criticised after he posted photos of himself surveying the prices of food items at a wet market.

According to his social media posting, prices of cabbages and spinach were stable but prices of bananas have increased by RM1 per kilogram compared to previous.

It did not take long before the post attracted backlash from netizens, who criticised Mustapa for focusing on the wrong kind of food items.

“Chicken is the issue, but spinach is the one that is being stabilised,” a netizen commented.

Mustapa is part of the Jihad Against Inflation Special Task Force led by Communications and Multimedia Minister Tan Sri Annuar Musa, where their main role is to garner information from ministries, agencies and the public to curb inflation and control price hikes.