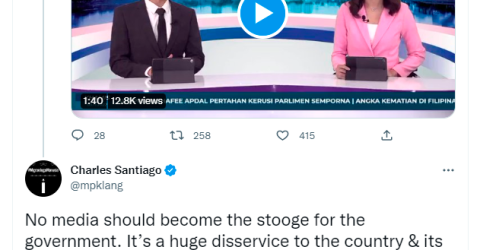 A NEWS bulletin on Awesome TV’s Berita 7:57 is being panned on social media for its racist editorial stance after encouraging Malay voters to vote in full force in the general election (GE15) to prevent political power from falling into ‘non-Malay hands’.

A clip of the broadcast dated November 3 shows two news anchors saying Malay voters should fulfil their duty by voting to prevent the rise of non-Malay politicians.

Former Klang MP Charles Santiago is among those who slammed the clip for being “racist to the core”.

He also urged the Malaysian Communications and Multimedia Commission to take action.