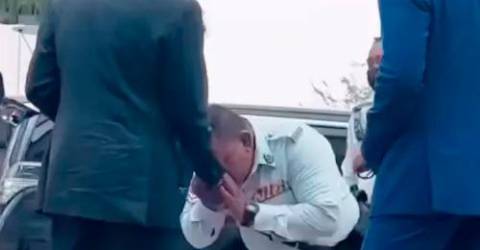 However, it was unclear where and when the picture was taken.

In the comment section, a debate triggered among netizens as many condemn the policeman for celebrating Najib although he has been convicted for his crimes.

Some even tagged PDRM’s official Twitter account and demanded them to take action on the said personnel.

However, the latest incident is not something new in Malaysia.

Earlier this year, a banquet held at a school went viral on social media with VIPs enjoying their feast under a luxurious tent, with chairs wrapped beautifully and the table nicely decorated, while the students eat crossed-legged on the floor.