No one said it was easy to be married to a genius. Especially one with appalling medical problems. Yet that was Sally Landau’s choice.

In 1959, at the age of 19, she married Mikhail ‘Misha’ Tal. A year later he was to become, at 23, the youngest person to have been crowned World Chess Champion.

In the Jewish community of the Latvian city of Riga, they must have been the equivalent of Richard Burton and Elizabeth Taylor. Landau, with golden-red hair and striking eyes, was an actress and singer.

Tal was the Paganini of the chessboard, Mephistophelean in his mastery. As his chess trainer, Gennadi Sosonko, recalled: ‘A glance from his burning eyes, which penetrated the board and his opponent . . . the unbelievable pressure of his ideas — these couldn’t be withstood emotionally by the weak.’

King and queen: Misha with Sally. No one said it was easy to be married to a genius. Especially one with appalling medical problems. Yet that was Sally Landau’s choice

His desire for conquest extended beyond the chessboard and, specifically, to other actresses besides Sally. Eventually, this ended their marriage, in 1971, although she admits she had retaliated with affairs of her own. These included a liaison with an insanely possessive member of the Central Committee of the Latvian Communist Party (described here only as ‘the Minister’) who had her followed everywhere by his goons.

According to Sally’s compelling account, Tal saw all this as just an extension of his chessboard battles: ‘He made no distinction between life and chess . . . the people around him were chess pieces who could be sacrificed, and who were meant to lead him to victory, because nothing else was possible.’

Therefore, any human ‘chess piece’ suddenly displaying its independence genuinely astonished Misha. ‘When I told him that he had betrayed me and exchanged me, he simply smiled and said: ‘Saska! You are my main and most wonderful piece. It’s wrong to exchange such pieces!’

When he discovered the nature of Sally’s relationship with ‘the Minister’, a friend told her Tal’s response was to feel ‘as though he had just blundered a piece without understanding how he did it. He won’t forgive either himself or you for this blunder.’

Although she emigrated from the Soviet Union, to marry again in her new home of Antwerp, and Tal himself married twice more, they remained in close touch.

He made no distinction between life and chess . . . the people around him were chess pieces who could be sacrificed, and who were meant to lead him to victory, because nothing else was possible.

Sally’s second husband, Joe, became friends with Tal, whom he idolised. But the by then former world chess champion retained his ruthlessly competitive spirit.

When Tal flew to Paris for a simultaneous display against 33 opponents, Joe asked to be added as a 34th. Misha agreed… and Joe became one of his victims. Landau upbraided her former husband: ‘Couldn’t you have let Joe draw?’ Tal replied with a laugh: ‘It was revenge for my defeat. After all, he won you off me.’

The one opponent Tal couldn’t defeat was his catastrophic health.

He was a frail child, and his right hand — with which he held the 100 or so cigarettes he smoked each day — had just three abnormally large digits, resembling a lobster’s claw.

From a young age he was plagued with excruciating pain from malfunctioning kidneys. Landau insists that his colossal alcohol consumption — he began drinking brandy as soon as he woke — was a response to the constant agony from his kidneys, rather than a contributing factor. 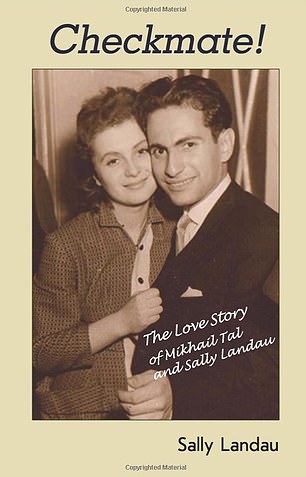 But he had always been an intellectual marvel, reading from the age of three and, at five, multiplying three-digit numbers. Then, at six, he discovered chess, the natural home for his freakish gifts. As the former World Champion Garry Kasparov wrote, in wonderment: ‘He is the only player I can remember who did not calculate lengthy variations: he simply ‘saw’ them.’

The last time they played each other was in 1992. Tal left hospital to play in a Moscow tournament and inflicted on Kasparov his only defeat. He died a month later at 55.

It defies belief that, despite his vast intake of alcohol and painkillers, this husk of a man could still beat younger grandmasters in their prime.

Of course, they worshipped him, for they best understood his unique genius. As Landau did, in her more romantic way: ‘Sometimes I think Misha flew in from another planet — just to play chess, and then fly home. I am proud of having lived with such a person, proud of his love. I miss him very much.’