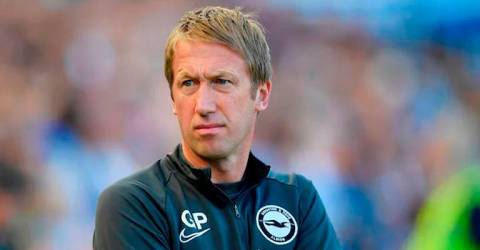 GRAHAM Potter (pix) said the vision showcased by Chelsea’s new ownership had convinced him to take charge of the London club, adding that this is the start of “a really exciting period” for Chelsea.

Potter was confirmed as Chelsea manager on Thursday to replace Thomas Tuchel, who was sacked just three months after a consortium headed by American Todd Boehly completed a 4.25 billion pounds ($4.86 billion) takeover of the club.

“It’s the start of a really exciting period, I think,“ Potter said in an interview with the club’s website published on Monday. “(I spoke with) the new ownership who I was really, really excited with and impressed by.

“Firstly, as people and then the vision for the club and what they wanted to do. Of course, the history of the club speaks for itself, but it’s about trying to create that again in our own way.

“A little bit of sadness, of course, leaving some good people but very, very happy and excited to meet some new people. So whole range of emotions, but overall I would have to say really happy and very proud.”

The 47-year-old, who had spells at Swedish side Ostersund and Swansea City before taking charge of Brighton & Hove Albion, said his move to the six-time English champions represented a forward step in his career.

“It’s just nice to be able to take the next step and to be able to work with an exciting group of players that we have here,“ Potter said. “And to compete at the top and try and create a winning team, that’s a fantastic opportunity for me.”

Potter added that his experiences with Brighton, who he helped avoid relegation in 2020 and 2021, had improved him as a manager.

“We’ve learned a lot in the Premier League, about how you can deal with the ups and downs,“ Potter said.

“About how you have to take responsibility when things aren’t going well. But I think we can use those experiences in a really good way and we’re a lot stronger, a lot better for them.”

Chelsea spent around 250 million pounds ($287 million) in the summer transfer window but are sixth in the league after six games. –Reuters