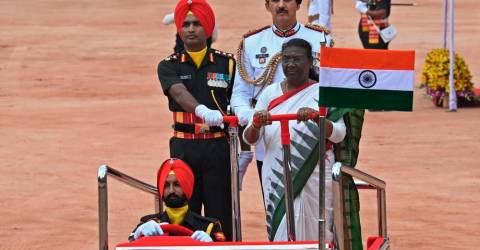 Murmu was sworn in as president at a ceremony held at the parliament house in New Delhi on Monday.

“My election is a proof of the fact that the poor in India can have dreams and fulfill them too,“ she said.

“From the background that I come from, it was like a dream for me to get elementary education. But despite many obstacles, my determination remained strong and I became the first daughter of my village to go to college,“ Murmu said.

Murmu hails from a small tribal village in the eastern state of Odisha.

She started her career as a school teacher and later entered politics.

“That I attained the post of President is not my personal achievement, it is the achievement of every poor person in India,“ Murmu said.

She earlier served as Jharkhand state’s governor between 2015 and 2021.

She is India’s second female president after Pratibha Patil, whose five-year term lasted until 2012.

India’s president is chosen through an electoral college system in which federal and provincial lawmakers are eligible to vote. – Bernama