Jeremy Corbyn was at the centre of another anti-Semitism row today as video footage emerged of him embracing an Islamic hate preacher convicted of using the ‘blood libel’ against Jews.

The now Labour leader is seen shaking hands with Sheikh Raed Salah after a 2012 talk in which he referred to him as a an ‘honoured citizen’ and invited him him to tea in the House of Commons.

Salah, a prominent member of the Islamic Movement in Israel, had been excluded from the UK because of concerns over his ‘virulent anti-Semitism’.

In 2011, he was able to slip through border control at Heathrow and give a number of speeches before he was arrested on the orders of the then Home Secretary Theresa May.

His deportation was blocked in 2012 but the judge ruled that he had been guilty of a blood libel – a trope which claims that Jews kill children to use their blood for religious rituals.

Salah served two years in prison from 2014 for raising millions of pounds for the Palestinian terror group Hamas.

The video, discovered by journalist Iggy Ostanin, came as 70 serving and former Labour officials condemned Jeremy Corbyn‘s handling of the party’s anti-Semitism crisis in a bombshell submission to the UK’s equalities watchdog.

The Labour Party is under formal investigation by the Equality and Human Rights Commission over its handling of allegations of anti-Semitism.

Euan Philipps, spokesman for Labour Against Antisemitism, said: ‘In August 2015, Mr Corbyn claimed that he had been ”unaware” of a British court’s findings in 2012 that found Raed Salah guilty of blood libel.

‘However, footage revealed today shows Jeremy Corbyn embracing Raed Salah in April 2012 – at the end of a meeting in which Mr Corbyn had been discussing the British court judgement which he later claimed to have known nothing about.

‘This evidence seems to prove not only that Jeremy Corbyn had close personal links with figures responsible for virulent anti-Jewish racism, but also his apparently willingness to avoid being truthful about these links.’

Mr Corbyn, pictured at a campaign event in Rugby today, and the Labour Party are under investigation by the Equality and Human Rights Commission 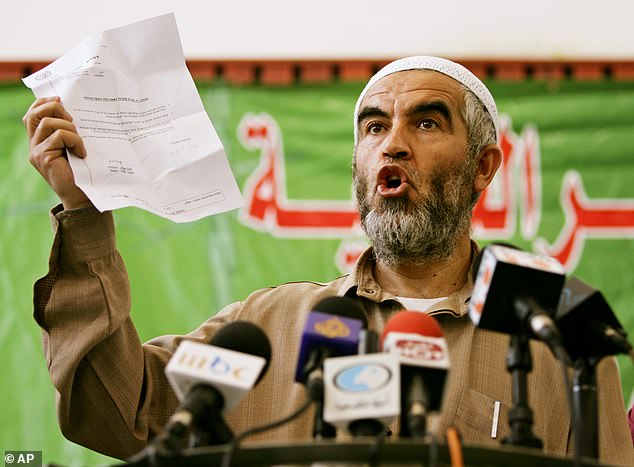 Sheikh Salah, a prominent member of the Islamic Movement in Israel, was excluded from the UK in 2011 because of concerns over his ‘virulent anti-Semitism’

The 70 current and ex-staff have given sworn statements which form part of the Jewish Labour Movement’s submission to the EHRC.

The 11 allegations against Jeremy Corbyn

The document handed over by the JLM represents a major blow to Mr Corbyn’s general election campaign as it contains numerous accusations about him as well as the Labour Party more broadly.

It includes a claim that some prospective Jewish Labour members in one constituency were subjected to ‘home visits’ before they were allowed to join.

The JLM submission argues: ‘The Labour Party is no longer a safe space for Jewish people or for those who stand up against anti-Semitism.

‘That is the disturbing but inevitable conclusion from the evidence that JLM has put before the Commission over the course of the past 13 months.’

The 53-page document claims that ‘Mr Corbyn himself has repeatedly associated with, sympathised with and engaged in anti-Semitism’.

It sets out in 11 points examples of Mr Corbyn’s past behaviour which the JLM claimed had acted as ‘signals to party members’ that ‘anti-Semitic views are acceptable’.

The JLM, which has been affiliated to Labour for decades, alleges that the party has tried to deny it has a problem and claims employees have spread ‘conspiracy theories designed to discredit those who speak out against anti-Semitism.’

It also claims that ‘high profile and senior members of the Party have repeatedly defended and/or associated with those accused of anti-Semitism’.

The JLM said this had provided ‘legitimacy’ for people in the lower branches of the party to ‘do the same and/or deny that a problem exists’.

Based on the evidence compiled by the JLM it concluded that Labour’s internal process for the handling of complaints was ‘inherently politicised’.

It alleges that staff were asked to upload details of cases to a USB drive which was then delivered to the Leader of the Opposition’s office for staff there to review and make recommendations.

The JLM submission alleges that Jewish Labour members have been ‘victimised’ at various levels of the party. 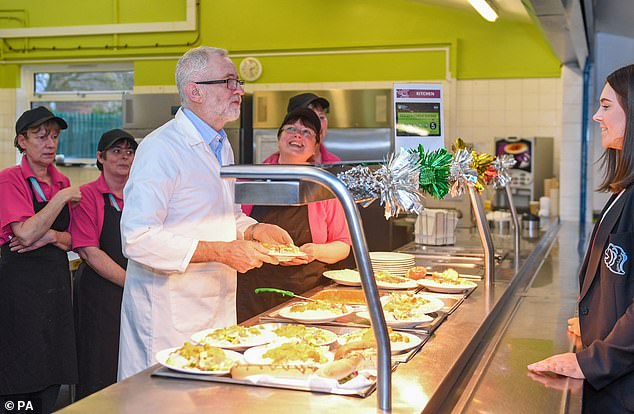 The Jewish Labour Movement has made a formal submission to the EHRC in which it claims Labour under Mr Corbyn, pictured in Rugby today, has tried to deny that it has a problem with anti-Semitism

For example, it cites evidence submitted by one respondent who claimed an official at a constituency Labour party had ‘objected to 25 applications for membership from the ultra-orthodox Jewish community and required home visits to these prospective members’ houses’.

‘This was not a requirement for other prospective members and appears to have been direct discrimination against Jewish applicants for membership,’ the submission states.

It highlights witness statements which revealed Jewish members often no longer feel able to attend Labour meetings ‘due to the intensity of animosity towards them’.

One respondent said they had compiled 22 examples of anti-Semitic abuse being directed at them at constituency Labour party meetings.

The EHRC investigation is ongoing and it remains unclear when it will publish its findings.

With Israel in political disarray of its own after two inconclusive elections, the UK contest has elicited few comments from Israeli leaders despite deep concern among British Jews over Mr Corbyn and media reports that some might opt to emigrate if he wins power.

Last week, Foreign Minister Israel Katz said the Israeli government had not discussed the prospect of Mr Corbyn’s election or the future of intelligence and security ties with Britain should the veteran pro-Palestinian campaigner become PM.

But pressed on the issue in an Israeli Army Radio interview today, Mr Katz was more forthcoming as the December 12 ballot approaches.

‘I won’t meddle in internal elections but I personally hope that he won’t be elected, with this whole wave of anti-Semitism…I hope the other side wins,’ he said.

The JLM has called for the watchdog to recommend that Labour is forced to make a public statement ‘acknowledging the scale and extent of the issue of anti-Semitism in the Party’.

That statement would also apologise for ‘promoting a pervasive culture of denialism and obfuscation and diminishing the experience of those who have suffered as a result’.

The JLM is calling for a tougher and more transparent Internal investigations process and for a requirement that all cases must be resolved by Labour within three months.

The group held a press conference in Westminster today with former Labour head of disputes and whistleblower Sam Matthews telling reporters the party’s handling of the anti-Semitism crisis was so bad it had prompted him to consider taking his own life.

‘During a prolonged period, my team and I were put in the intolerable position of witnessing widespread racism in the party, and not having the support from those above us to tackle the problem effectively,’ he said.

‘A problem so intolerable that it directly affected the mental health of myself and my team, to the point where, by the end, I considered taking my own life.’

Mr Matthews said whistleblowers who are still Labour staff are ‘fearful of retribution from their employer’ for speaking out.

The JLM has refused to endorse Mr Corbyn as prime minister having previously passed a motion saying it had no faith in him to lead the country.

Mr Corbyn said this morning that he ‘completely’ rejects allegations made by the JLM that the party had become a refuge for anti-Semites under his leadership.

Asked about the group’s claims during a campaign visit to a school in Peterborough, Mr Corbyn replied: ‘I completely reject that. When I became leader of the party there were no processes in place to deal with anti-Semitism.’

‘I do not interfere with cases and as I pointed out it’s an independent process,’ he said.

A Labour Party spokeswoman said: ‘Anti-Semitism is an evil and we are committed to rooting it out of our Party and society. We are fully cooperating with the EHRC.

‘The allegation about numbers of outstanding cases is not accurate. And it is categorically untrue that anyone has been instructed to lie.

‘The Labour Party is not institutionally anti-Semitic and complaints relate to a small minority of our members.’