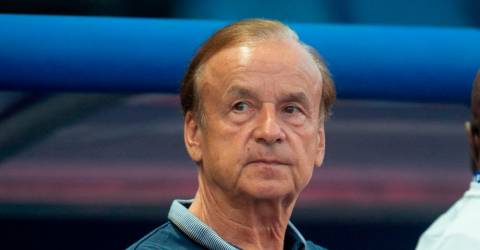 ABUJA: The Nigeria Football Federation (NFF) on Sunday sacked Gernot Rohr as coach of the national team after several weeks of speculation concerning his future due to poor performances.

The 68-year-old German national Rohr, who had been Super Eagles coach since August 2016, had a contract with Nigeria until December 2022.

“The relationship between the Nigeria Football Federation and Mr. Rohr has come to an end,“ said NFF general secretary Mohammed Sanusi in a statement.

“We thank him for his services to the Super Eagles and Nigeria,“ he said.

Rohr led Nigeria to the 2018 World Cup and guided the team to third at the 2019 Africa Cup of Nations in Egypt.

Rohr has also qualified the Eagles for next year’s Africa Cup in Cameroon, but he recently came under fire for poor displays against lowly-rated opponents.

Eguavoen was coach when Nigeria finished third at the Africa Cup of Nations in Egypt in 2006.

He was team captain when the Super Eagles lifted the Africa Cup for the first time on away ground, in Tunisia 27 years ago.

He will take charge of preparations for the delayed 2021 Africa Cup of Nations in Cameroon between January 9 and February 6, pending the appointment of a permanent coach. – AFP