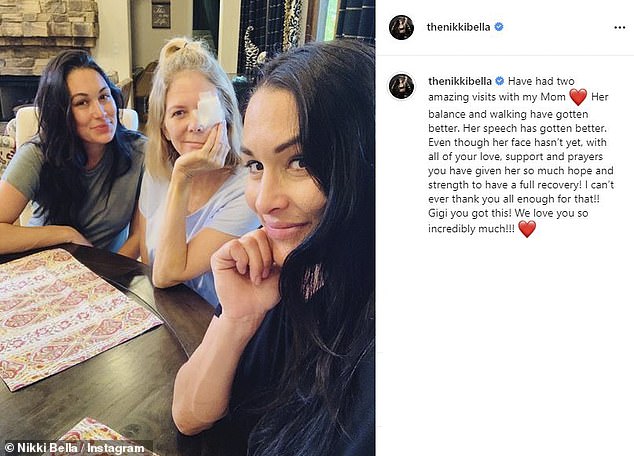 Nikki and Brie Bella enjoy second ‘amazing visit’ with mother Kathy as she recovers from brain surgery: ‘Gigi you got this!’

By Sameer Suri For Dailymail.com

Nikki and Brie Bella enjoyed a second ‘amazing’ visit with their mother Kathy Laurinaitis as she recovered from surgery.

The 36-year-old WWE star twins previously revealed there was ‘a mass on our mother’s brain stem as big as a blueberry’ which had to be excised.

On Thursday Nikki shared a sweet Instagram snap showing her and Brie sitting with Kathy who still had a patch over one eye.

‘Gigi you got this!’: Nikki and Brie Bella enjoyed a second ‘amazing’ visit with their mother Kathy Laurinaitis as she recovered from surgery

Their mother has clearly been discharged from the hospital as the trio were sitting at a dining table in what was presumably Kathy’s home.

‘Have had two amazing visits with my Mom,’ wrote Nikki in her caption, adding a heart emoji for good measure.

‘Her balance and walking has gotten better. Her speech has gotten better. Even though her face hasn’t yet, with all of your love, support and prayers you have given her so much hope and strength to have a full recovery! I can’t ever thank you all enough for that!! Gigi you got this! We love you so incredibly much!!!’

Nikki and Brie revealed on their Bellas Podcast Wednesday that Kathy, nicknamed Gigi, is ‘now on the road to recovery, which will be about six months to a year.’ 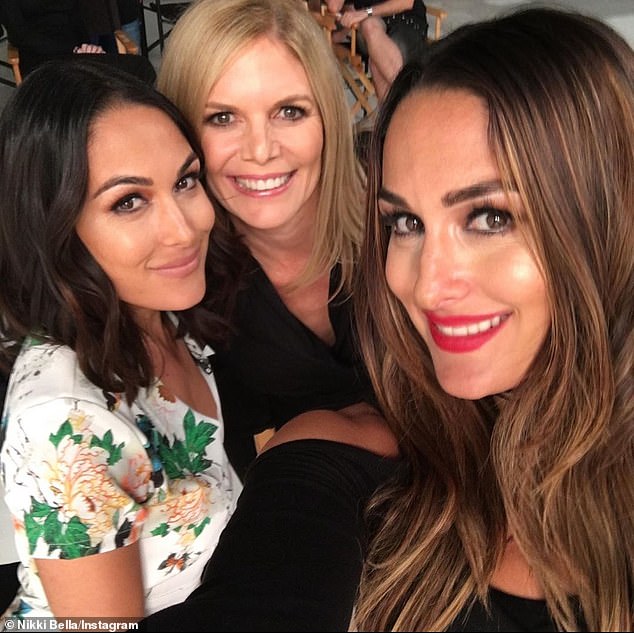 Loving daughters: The 36-year-old WWE star twins previously revealed there was ‘a mass on our mother’s brain stem as big as a blueberry’ which had to be excised

The surgery actually occurred late last month and Brie said: ‘We’re just so happy that she has a light at the end of the tunnel.’

Brie also got into the details of her mother’s symptoms, revealing the ‘majority of her face was paralyzed’ to the point she was at one point thought to have Bell’s palsy.

However when Kathy awoke one morning ‘extremely dizzy’ and unable to feel her ‘whole face’ or to taste food, her husband John took her to the hospital.

There doctors discovered the blueberry-sized mass, which Nikki said ‘was sticking out of her brain stem and it was starting to hit nerves. It was growing rapidly.’ 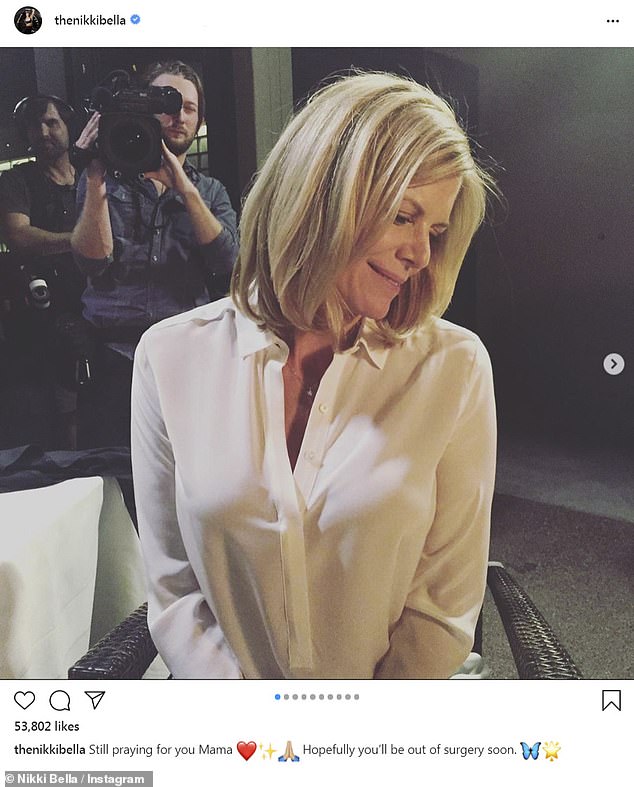 Looking ahead: The surgery actually occurred late last month and Brie said: ‘We’re just so happy that she has a light at the end of the tunnel’

Although the doctors mulled putting off the surgery because of the COVID-19 pandemic, they decided to move ahead as the mass was at a ‘fatal spot.’

Brie revealed on the podcast: ‘My mom’s actually so lucky that she saw the symptoms on her face because if she didn’t have any symptoms and walking around with this, down the road it could’ve been fatal.’

Although the operation was estimated to last four to six hours Nikki revealed that ‘On the seventh hour, we hadn’t heard from any of the doctors.’ 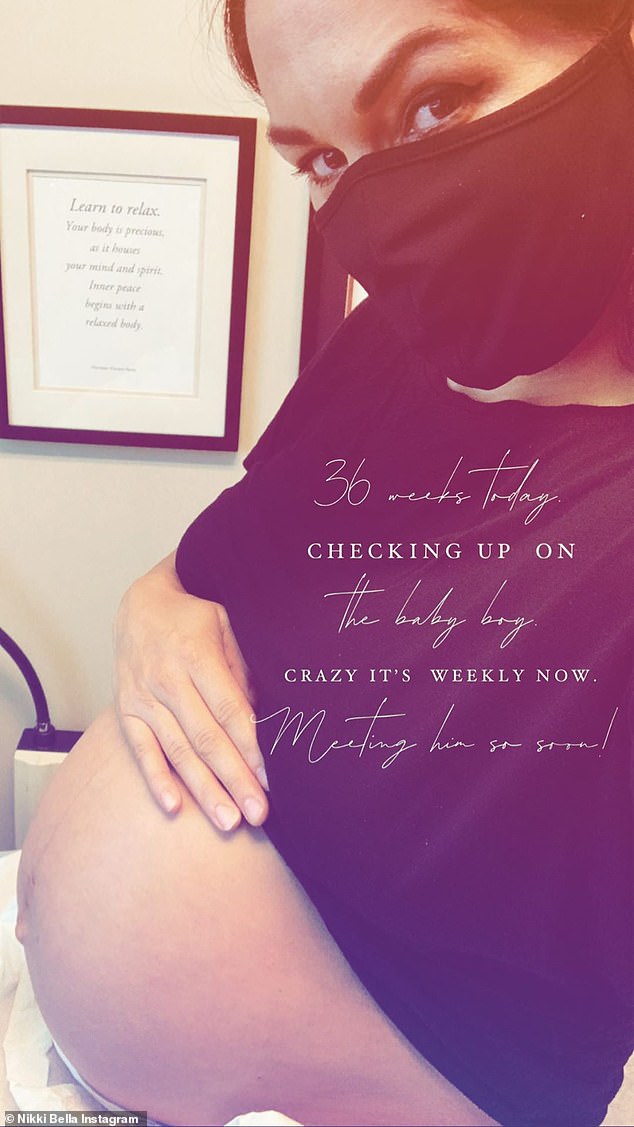 ‘Checking up on the baby boy’: Nikki and Brie both happen to be pregnant at the same time and Nikki recently shared on her Insta Stories that she is ’36 weeks’ along

She shared: ‘So, you can imagine, we were super nervous. They just really took their time in there and they really cleaned everything out and wanted to double check.’

Nikki and Brie are simultaneously pregnant and have been hunkering down together with the respective men in their life.

Brie is expecting by her husband Danie Bryan, with whom she shares her three-year-old daughter Birdie, and Nikki is pregnant by her fiance Artem Chigvintsev.