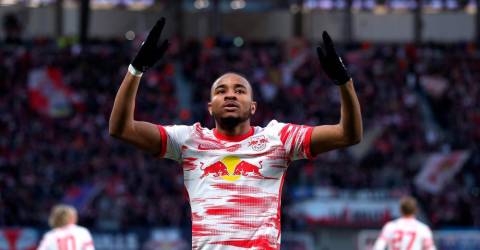 Nkunku bagged his 17th league goal this season to give hosts Leipzig an early lead, then set up Dominik Szoboszlai as Leipzig consolidated fourth place.

Midfielder Marcel Halstenberg scored Leipzig’s second goal as he netted for the first time after missing most of the season with injury.

Nkunku’s strike – a superb finish from a free kick – saw him move up to third among the leading scorers.

Robert Lewandowski of Bayern Munich is the league’s top marksman after scoring his 32nd league goal on Saturday in a 1-0 home win over Augsburg.

Nkunku now has one more goal than Norway star Haaland, who has not scored in his last five games for Dortmund.

“That was a good performance from the start,“ said Tedesco, who leapt for joy after Halstenberg’s goal.

“I was just so pleased for him, especially as he wasn’t able to play football for so long and he has worked so hard in training.”

Leipzig have picked up 29 points in the second half of the season – three more than league leaders Bayern.

They are now just a point behind third-placed Leverkusen who they face away next Sunday.

It was a disappointing result for Frankfurt, four days before their European second leg at Barcelona’s Camp Nou having drawn the home tie 1-1 last Thursday.

There was a brief delay at the start of the first half when two environmental protestors tied themselves to a post in the Frankfurt goal.

After Kostic’s equaliser ruled out Grifo’s opening goal, Petersen came off the bench to head in the winner from a free-kick on 69 minutes.

Frankfurt thought they had equalised again when Japan midfielder Daichi Kamada hit the bottom corner late on, but VAR ruled he was offside.

Elsewhere, a slip while taking a penalty cost France winger Moussa Diaby the chance to score as third-placed Leverkusen were held to a goalless draw at Bochum.

Leverkusen were awarded a penalty when Czech Republic striker Patrik Schick went down in the area midway through the second half.

Diaby stepped up to take the spot kick, but slipped striking the ball, which flew into the net only after rebounding off his standing leg.

The referee spotted the second touch and disallowed the goal. – AFP