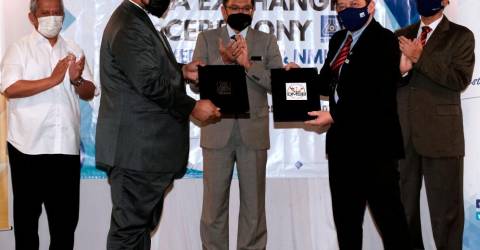 PUTRAJAYA: The National Metrology Institute of Malaysia (NMIM) will train 106 verification officers of DE Metrology Sdn Bhd (DMSB), which provides testing and verification services for weights and measures equipment for trade use, in the first quarter of 2022.

A memorandum of agreement (MoA)on this effort was signed here today, enabling NMIM to conduct the competency and consulting course for DMSB, the company appointed by the Domestic Trade and Consumer Affairs Ministry (KPDNHEP) under Section 26A(1) (B) of the Weights and Measures Act 1972. NMIM is a unit under SIRIM.

The competency and consulting course which covers fluids, timing, and linear and mass measures will be conducted over a two-year period that includes theory evaluation via online, the practical session via pre-recorded videos and the physical evaluation at the DMSB branches according to regions.

KPDNHEP secretary-general, Datuk Seri Hasnol Zam Zam Ahmad said that from time to time, there would be irresponsible people taking advantage by manipulating the markets or reaping excessive profits through the weights and measures equipment.

“Whether it’s weighing on a small scale by traders at the wet markets or on a big scale such as in the oil palm and automotive industries, we need to ensure that the country’s business landscape is at a high level of compliance all the time with regard to weights and measures,” he said at a news conference after the signing of the MoA.