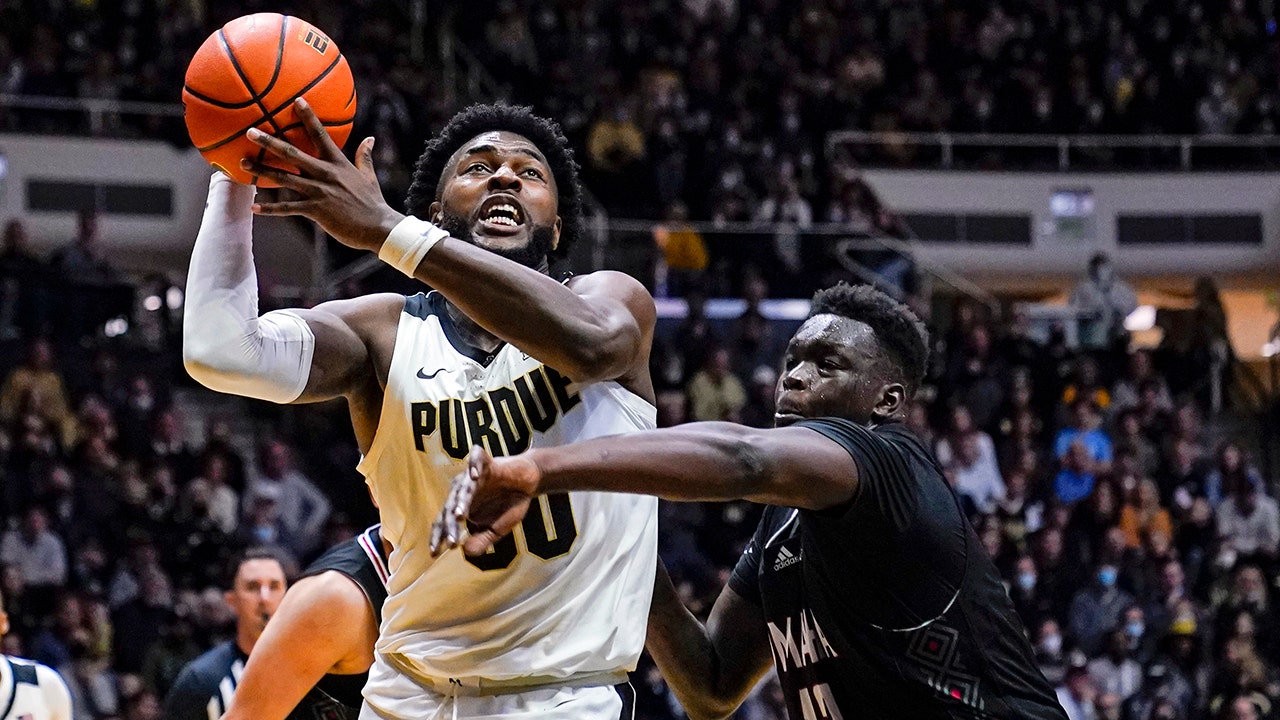 No. 3 Purdue accomplished one goal Friday by keeping the foot on the accelerator.

The bigger ones still lie ahead.

Purdue outrebounded the Mavericks 53-22 and outscored them in the paint 48-16 while improving to 6-0 for the first time since 2015-16 and just the fourth time in coach Matt Painter’s tenure.

“A lot of teams settle and they get comfortable and we had to build off the energy of last weekend,” preseason All-American Trevion Williams said, referring to the sweep of No. 18 North Carolina and No. 5 Villanova. “Our goal was to come out strong and we did.”

They did it all.

Williams had 14 points and 10 rebounds in 21 minutes. The Boilermakers shot 57.6% from the field and 52.6% on 3-pointers. Defensively, they were equally strong, allowing their lowest scoring total since routing Virginia 69-40 in December 2019.

Omaha (1-5) was led by Darrius Hughes with 13 points. It lost its fifth straight — all on the road — and produced its lowest point total since an 86-40 loss to Wisconsin in December 2012.

“We have to play these games,” coach Derrin Hansen said. “We’ve played them all in the last eight or 10 seasons and this is the most complete team we have played. They can rise up and and make shots from anywhere and they get them from anyone. This team has a little bit of everything and a lot of some things.”

Purdue was the highest ranked team the Mavericks have played in their 11-year Division I era and the disparity was clear from the opening moments. For the second straight game, Omaha took its only lead on its first basket — Dylan Brougham’s 3-pointer.

The Boilermakers countered with a 29-0 run, a span in which they forced 12 consecutive missed shots and four turnovers. When Marco Smith finally ended the drought with 8:44 to go, the Mavericks already trailed 31-5.

The Boilermakers led by as much as 37 before taking a 52-17 halftime lead, matching its highest scoring total in any half this season. They methodically extended the margin throughout the second half.

“Our ability inside, our size, is a huge advantage for us,” Painter said.

Omaha: Hansen’s team never stood a chance with no players listed as taller than 6-foot-9. The Mavericks were outmatched on the perimeter, too. With six of the next seven at home, Omaha should simply leave this one in the past and focus on rebounding against a more manageable schedule.

Purdue: Edey, Williams and Caleb Furst dominated the middle against a much smaller team and with the Boilermakers going 7 of 12 on 3s in the first half, it was a devastating combination. While the Boilermakers cruised Friday, they’ll need to be equally efficient against tougher foes.

Purdue won’t get much help from a victory over a team that was picked to finish eighth in the Summit League this season. But UCLA’s loss to Gonzaga puts the Boilermakers in the mix for the No. 2 spot next week.

Omaha: It started and finished a five-game road trip with losses to Indiana teams — Ball State and Purdue. … The Mavericks lost starting guard La’Mel Robinson with a season-ending injury before the Nov. 9 opener. … Omaha shot just 27% from the field and was 5 of 28 on 3s.

Purdue: Brandon Newman scored 16 points and Jaden Ivey had 12. … The Boilermakers won after earning their highest pre-Christmas ranking since 1987-88. … Williams was honored before the game for joining the school’s 1,000-point club. … The Boilermakers are 9-0 all-time against Summit League schools.