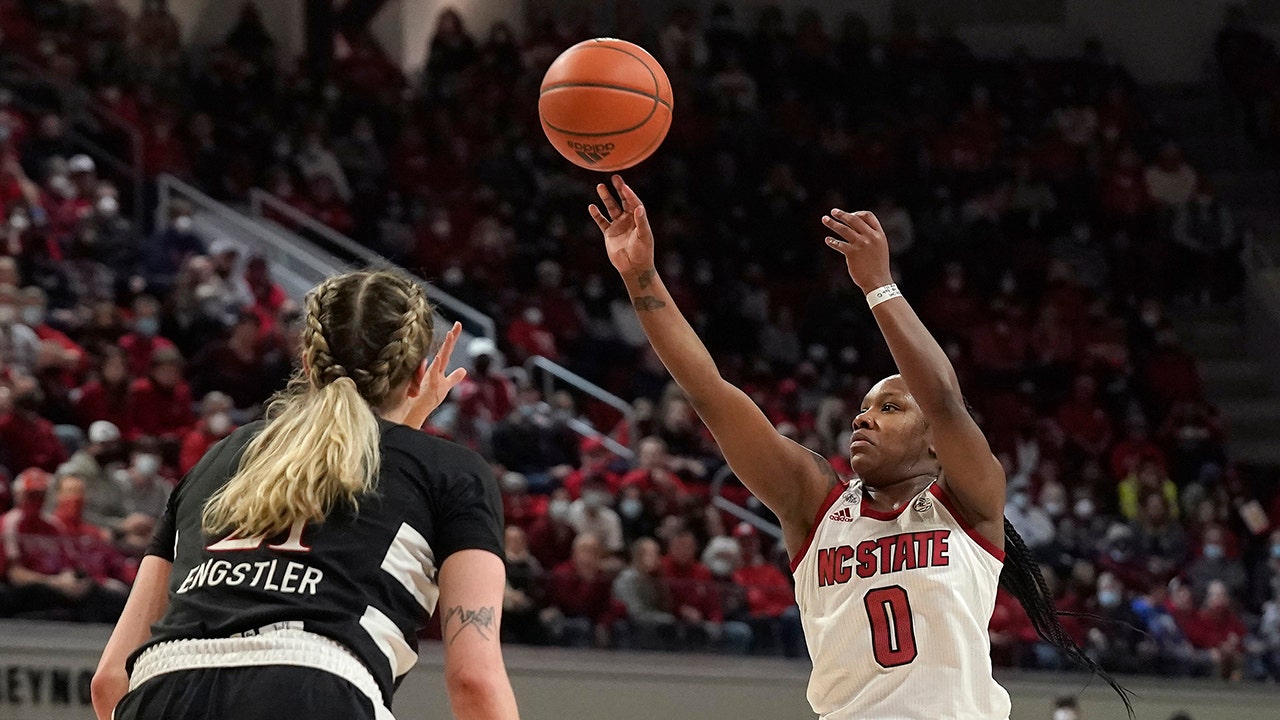 Diamond Johnson didn’t lose confidence, so it wasn’t a lost cause for No. 4 North Carolina State.

Johnson scored 11 of her 16 points in a 4 1/2-minute stretch of the fourth quarter, and the Wolfpack wiped out a 16-point second-half deficit to beat No. 3 Louisville 68-59 on Thursday night.

A 17-0 run in the fourth quarter ignited the Wolfpack to their third win against a top-10 opponent this season. Louisville’s 15-game winning streak, the longest in Division I, came to a halt.

Johnson, a reserve guard, was 1-for-12 from the field entering the fourth quarter, when she drained five of seven shots.

“I can’t be frustrated for long,” said Johnson, a transfer from Rutgers. “I still have to be here for my team.”

Olivia Cochran scored a season-high 19 points, Emily Engstler had 15 points and 11 rebounds, and Hailey Van Lith had 13 points for Louisville (15-2, 5-1), which committed seven of its 12 turnovers in the fourth quarter. The Cardinals have won four consecutive ACC regular-season titles.

“I’m not going to concede and say we aren’t right there with them,” Louisville coach Jeff Walz said. “We are a top-five team for a reason. Do we still have room to grow? Of course we do.”

N.C. State used its defense as a spark, and then everything fell into place.

“Once our defense picks up, it gives us energy for our shots to start falling,” Johnson said.

The Wolfpack entered the game ranked first nationally in 3-point shooting at 40.9%, but they missed 12 in a row until Johnson and Brown-Turner connected on consecutive possessions during the fourth-quarter comeback. N.C. State finished 6-for-19 on 3s.

“They came out and pressed us and we knew it was going to come and we just didn’t handle it,” Walz said.

By then, the home fans were roaring their approval.

Van Lith drained two 3s in the first 1:03 of the second half. Then Cochran matched her season-high mark less than two minutes into the third quarter. N.C. State closed within 52-41 before a jumper by Cochran seemed to keep the Cardinals in control.

After eight first-quarter lead changes, Cochran had 11 points as the Cardinals built a 26-17 lead.

Louisville rebounded 10 of its misses by midway through the second quarter, and soon it was 33-17.

N.C. State trailed 34-21 at halftime, shooting 2 of 13 from the field with five turnovers in the second quarter.

It was the only scheduled meeting between the teams, who met in last year’s ACC tournament title game, with N.C. State winning by two.

Louisville: The Cardinals were gunning for their third win against a top-10 team this season. They shot 2-for-12 on 3-pointers and didn’t make the most of 18 offensive rebounds in their first true road loss.

N.C. State: The Wolfpack have put together notable second-half rallies the past couple of seasons, but this might be the most impressive. N.C. State allowed more offensive rebounds to its foe than in its last two games combined.

FLURRY IN THE FOURTH

N.C. State outscored Louisville 31-8 in the fourth quarter. That was the Wolfpack’s highest-scoring quarter of the season.

It was more points than the Cardinals permitted in two full November games when they beat Bellamine 82-25 and UT Martin 62-30, and almost as many as they gave up in a 72-32 rout of Cal Poly.

Louisville had allowed more than 20 points in only two quarters all season, with the high mark Belmont’s 22 in the fourth.

This was the sixth consecutive meeting with both teams ranked in the top 10. … Four of Cochran’s five double-figure scoring games this season have come against ACC opponents. … N.C. State’s losses came to No. 1 South Carolina and in overtime to now-No. 13 Georgia, while it has wins against now-No. 12 Maryland and now-No. 6 Indiana.