Draw up a wish-list list for an ideal family skiing holiday — proximity to slopes and ski school, enough altitude for good snow at the start or end of the season (prime school holiday time), no queues — and the list soon shrinks.

So I was intrigued when a friend suggested Val Cenis. It sits in the French Alps just 20 miles over the hill from famous British enclaves such as Val d’Isere — yet I hadn’t heard of it.

And that’s just how many of its devoted British fans would like to keep things.

Val Cenis, pictured, sits in the French Alps just 20 miles over the hill from famous British enclaves such as Val d’Isere

There are no nightclubs, for example, and few hotels but 75 miles of marked pistes. It is actually two villages, half a mile apart, with a lot of purpose-built self-catering apartments aimed specifically at families — roomy flats with plenty of living space.

It is a particular favourite of Peak Retreats, the specialists in self-catering, self-driving family ski holidays to the French Alps.

Now, there is a lot to be said for driving to the Alps if there are more than two of you. The fixed costs mean it is not only cheaper than flying but, if you live within a few hours of the Channel, as we do, the door to door travel time is only a few hours more than flying.

Peak Retreats include a Flexiplus Eurotunnel ticket so you can turn up at Folkestone and drive straight on the next shuttle.

It all makes for a less stressful start to your holiday, especially if you break the journey en route. We stopped three hours from Calais at the Royal Champagne hotel and spa, perched above Moet & Chandon vines near Epernay. The Royal Champagne has a genuine ‘royal’ provenance since both Napoleon and the Queen Mother stayed at this onetime ‘relais de poste’.

With a panoramic view out over the vast grape-scape below, the indoor pool puts you in instant holiday mode before dinner in either the Michelin-starred Le Royal dining room or the more family-friendly Bellevue restaurant. 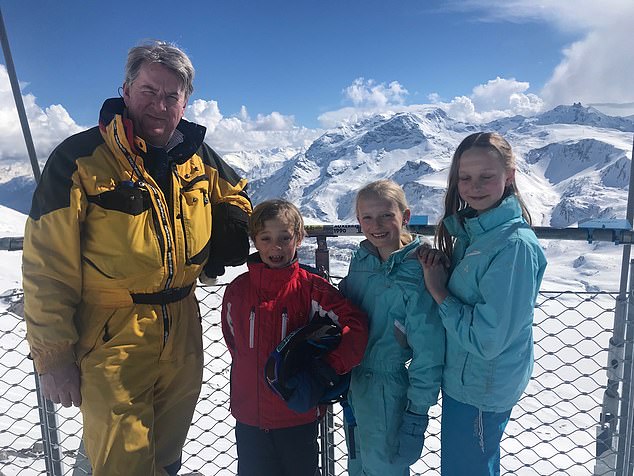 Winter wonderland: Robert with his three children in Val Cenis. The skiing suits all abilities, even at altitude

It was a painless drive from here to Val Cenis, where we stayed in the Chalets de Flambeau, situated at 1,500 metres next to the slopes, midway between the two villages which comprise Val Cenis.

Being attached to a ski pass office, ski school, ski hire, ski lifts, a shop and pizzeria, it is a self-contained complex with all the facilities of a high-end hotel, including a reception which arranges your daily bread and croissants.

Our third floor apartment for five turned out to be a generous duplex over two floors with three double bedrooms, two bathrooms, and good-sized kitchen with all the kit.

The lift connects directly to a heated ski room. Even better is the spa complex with indoor pool, hot tubs and saunas. That’s the children’s apres-ski sorted.

The skiing suits all abilities, even at altitude. Our three, aged 11, ten and seven, started one notch above beginners but were on blue and red runs after a week of morning lessons.

Val Cenis prides itself on having Europe’s longest green (novice) run which meanders for seven miles through the trees. 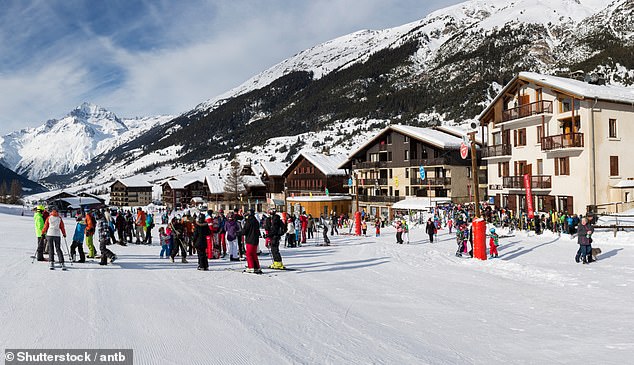 Val Cenis has 75 miles of marked pistes. It is actually two villages, half a mile apart, with a lot of purpose-built self-catering apartments aimed specifically at families

A new ten-man bubble with heated seats whisks you from base to the top of the treeline at 2,100m and a network of chairlifts leading to broad, uncrowded blue and red runs plus the odd black. Even in mid-April there was snow from top to bottom.

What I liked was how the whole family could ride together up to ‘Met’, the resort’s highest point at 2,800m, and walk along a gantry to a balcony with views as far as Italy.

From there, we could ski the whole way back to our apartment. Most resorts have a ‘vue panoramique’ at the summit. Not many possess a route which allows a seven-year-old novice to ski all the way down again.

Another highlight was a dog-sledging trip from the top of the Ramasse chairlift where rotating dog teams take groups of two or three for a half hour ride across the mountain.

At the end of the day, when not in the pool, my lot also enjoyed the free-range luge racing down the Colomba nursery slope.

Food-wise, there are mountain lunch spots which won’t break the bank.

The Tatine at the foot of the Vieux Moulin lift does good galette pancakes but our favourite was the Alpenrock at the top of the chairlift towards Termignon. 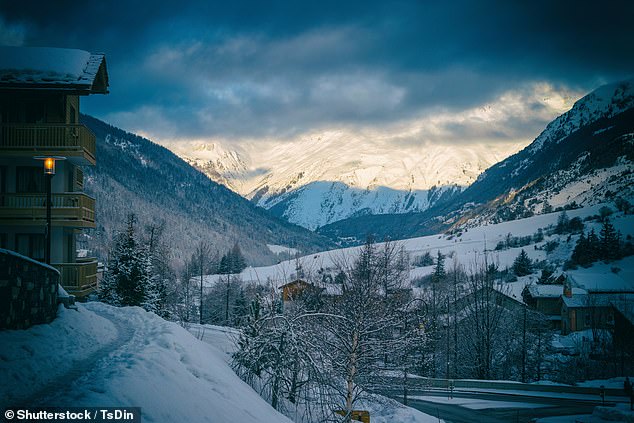 Robert says that Val Cenis, pictured, is not just refreshingly devoid of honking British voices, it is also a town where there are no traffic wardens, no yellow lines and no meters

Eating out in town is considerably cheaper but, like most people, we tended to eat in each night.

That was made much easier by a new British-run delivery service called Huski which has spotted the growing market in self-catering Brits who are not mad keen on catering at the end of a long day’s skiing.

From a base in Bourg St Maurice, they bring oven-ready dinners for up to a dozen people —— from tartiflette to lamb tagine and sticky toffee pudding — in cold boxes to your door in dozens of French resorts (free delivery on orders over €75/£63). And when you do want to venture out to the supermarket or bars, there is an added bonus.

Val Cenis is not just refreshingly devoid of honking British voices, it is also a town where there are no traffic wardens, no yellow lines and no meters.

If you are going to drive all the way to the Alps, the last thing you want to worry about is a parking ticket.

Robert and his family stayed with Peak Retreats (peakretreats.co.uk) in Chalets de Flambeau, Val Cenis. Seven nights self-catered from £233pp including a return Eurotunnel crossing with free upgrade to flexiplus on most dates.