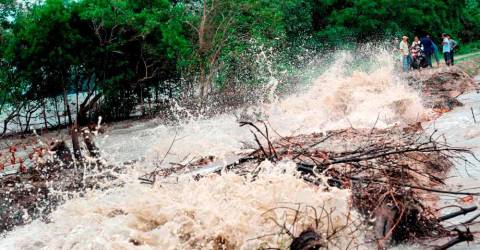 KUALA LUMPUR: Works to repair and strengthen the collapsed bunds which caused river water to overflow its banks in Sungai Tengi, Tanjong Karang in Selangor at 4 am on Nov 6 have been completed at midnight on the same day.

In a statement, the Drainage and Irrigation Department (DID) said the repair and strengthening works were made using state funds.

“Up to 5 am on Nov 7 (Monday), the high tide at 5.30 metres did not cause the newly-repaired bund to collapse and there was no report of water overflowing its banks.”

According to the statement, Selangor DID will continue to monitor the situation at the site and nearby high-risk areas.

It also said as a long-term solution, DID will apply for allocations to implement further strengthening and stabilising of Sungai Tengi banks in Tanjong Karang area.

“However, the implementation of this project is subject to approval,“ it said.

On Nov 6, Bernama reported that seven in a family were forced to leave their home after it was flooded by overflowing water due to a burst bund in Tanjong Karang town.-Bernama