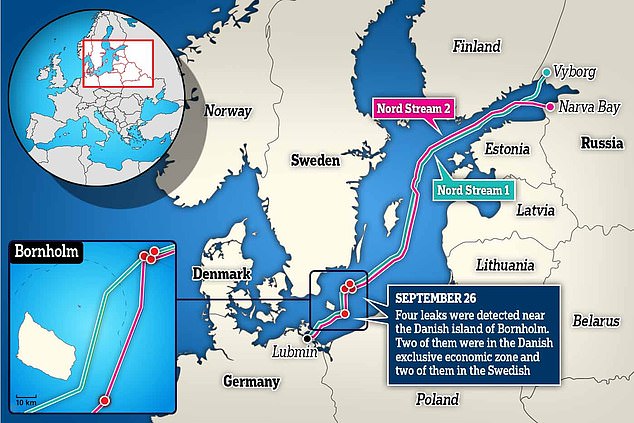 Methane gas that leaked from a damaged Nord Stream pipeline in September will not increase global warming, a new study claims.

The leaks will have a ‘negligible’ effect on warming, despite releasing 220,000 tons of methane into the air, academics say.

This is relatively ‘tiny’ and too small to affect humans compared with emissions from sources such as the coal and gas industries, they add.

The cause of the pipeline damage is unknown, although there are suspicions from Western leaders that it was caused deliberately by Russia.

A few days after the leaks, Danish Prime Minister Mette Frederiksen said that the leaks were no accident and that she ‘cannot rule out’ sabotage. 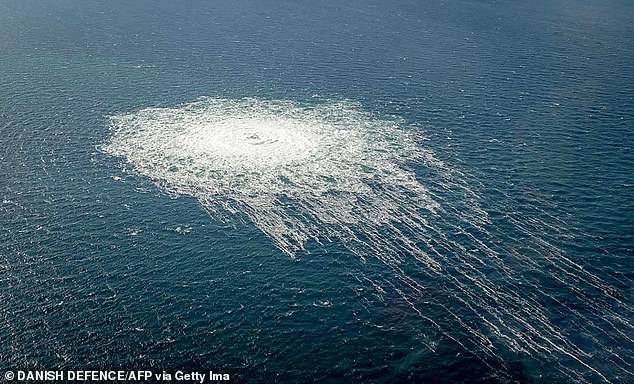 This photo from the Danish Defence Command shows the gas leak at the Nord Stream 2 gas pipeline, as seen off the Danish Baltic island of Bornholm, south of Dueodde 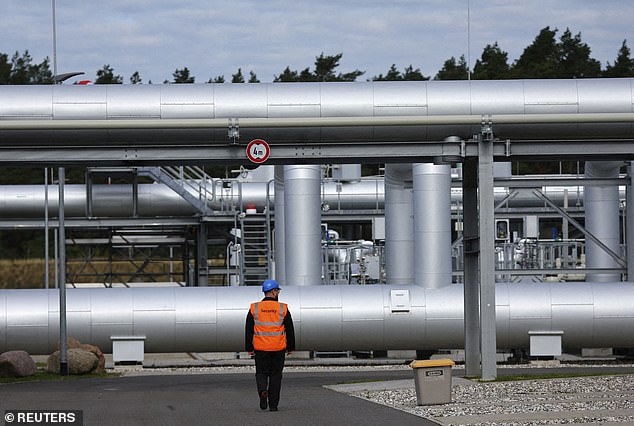 Security walks in front of the landfall facility of the Baltic Sea gas pipeline Nord Stream 2 in Lubmin, Germany, September 19, 2022

What was the Nord Stream gas leak?

A sudden loss of pressure in the pipelines was noted by operators of Nord Stream 2 overnight on Monday, September 26.

This was followed by a statement from the Danish Energy Authority outlining that a leak likely occurred in a pipe.

It was later confirmed on Tuesday by Sweden’s Maritime Administration that two fissures had been detected on Nord Stream 1 in Swedish and Danish waters.

A third leak was later reported on the Nord Steam 2 pipeline, that has yet to begin commercial operations, in the same area northeast of the Danish island of Bornholm.

The new study was led by experts at the Institute of Atmospheric Physics, Chinese Academy of Sciences, Beijing.

‘We derived a negligible increase in global surface air temperature,’ they say in their new paper, published in Advances in Atmospheric Sciences.

‘Although the resultant warming from this methane leak incident was minor, future carbon release from additional Earth system feedbacks, such as thawing permafrost, and its impact on the methane mitigation pathways of the Paris Agreement, warrants investigation.’

On September 26, Nord Stream 1 and 2, two subsea pipelines for transferring natural gas from Russia to Germany, were both ‘deliberately’ ruptured, the experts say.

Massive quantities of gases, primarily methane, escaped into the ocean and were then released into the atmosphere.

Methane is a greenhouse gas, meaning it exacerbates global warming and climate change effects if it is released into the atmosphere.

It is also highly flammable, so when in contact with the air it raises the risk of explosion, and directly reduces air quality.

Methane is the second most abundant anthropogenic greenhouse gas after carbon dioxide (CO2), but has a much stronger greenhouse effect.

The visible leaks from the four spill points gradually lessened and stopped around October 2, the team say. 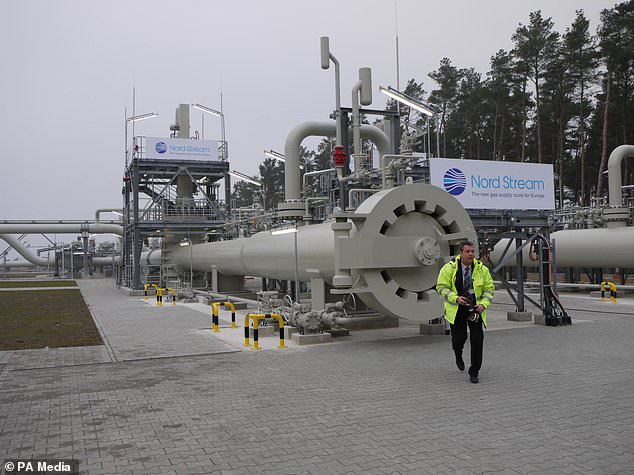 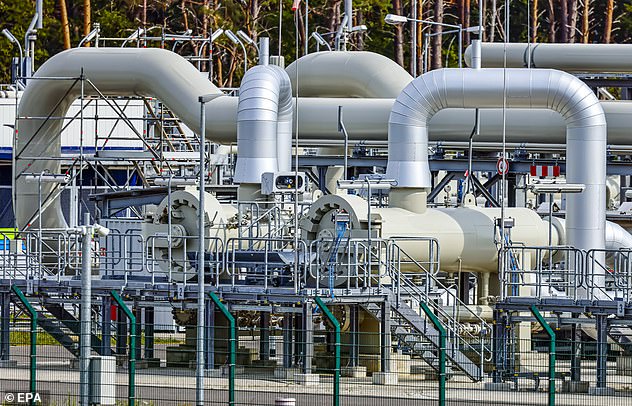 The pipelines show signs of sabotage and multiple ‘detonations’, Swedish authorities have said. Pictured, pipes at the landfall facilities of Nord Stream 2 in Lubmin, Germany 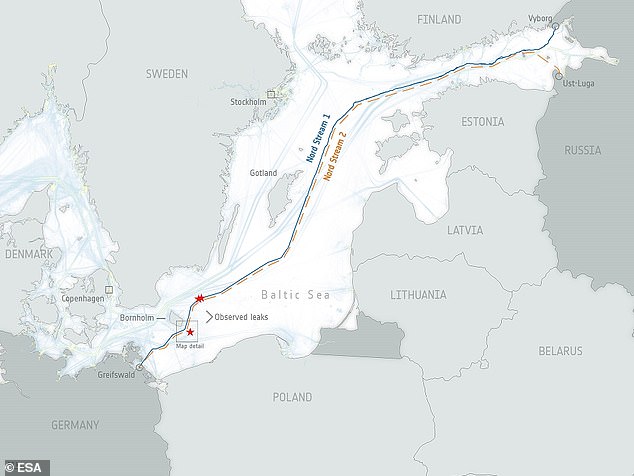 Methane from Nord Stream is detected from space

Methane leaking from a ‘sabotaged’ pipeline in Northern Europe has been captured by satellites.

Imagery from satellite company GHGSat shows the stream of methane over the Baltic Sea off of Sweden.

The methane leaked from a rupture point on Nord Stream 2 – one of two pipelines linking Russia to Germany thought to be deliberately damaged. 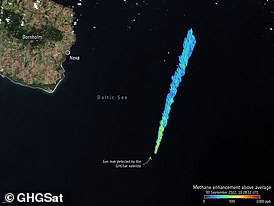 Images from satellite company GHGSat show methane concentration in the atmosphere on the surface of the Baltic Sea off the coast of Sweden. Methane bubbles rose from the underwater pipes and were released into the atmosphere once reaching the water’s surface

For their study, the researchers estimated the climate impact of the leaked methane using the energy-conservation framework of the Intergovernmental Panel on Climate Change’s Sixth Assessment Report (IPCC AR6), released in 2021.

These assessment reports provide scientific evidence for policymakers to use in decisions about how to tackle climate change.

The researchers collected estimates of the total amount of leaked methane available in the world’s media after the incident, including those from AFP, Associated Press and an article in Nature.

They found that the earliest estimates of total emissions (one to two days after the leaks) reached up to 500,000 tons, while the latest (one month after the incident) put the estimate at no more than 250,000 tons.

Another study by a research team from Nanjing University gave ‘a more accurate estimate’ of no more than 220,000 tonnes by drawing upon multiple observations, including those from high-resolution satellites.

At 220,000, this would still make it the largest methane emission in a single event in human history – more than twice that of the Aliso Canyon accident in 2015, which released around 100,000 tons of methane from an underground storage facility in California’s Santa Susana Mountains.

However, the Institute of Atmospheric Physics team argue that the Nord Stream emissions are ‘still trivial’ compared with other emissions sources.

For example, according to IPCC AR6, annual emissions of methane from the oil and gas sectors amounted to as much as 70 million tons between 2008 and 2017.

So if 250,000 tons is taken as reasonable estimate of the methane leaked by Nord Stream, this is only equivalent to 1.3 days of emissions from the oil and gas sectors, the researchers point out. 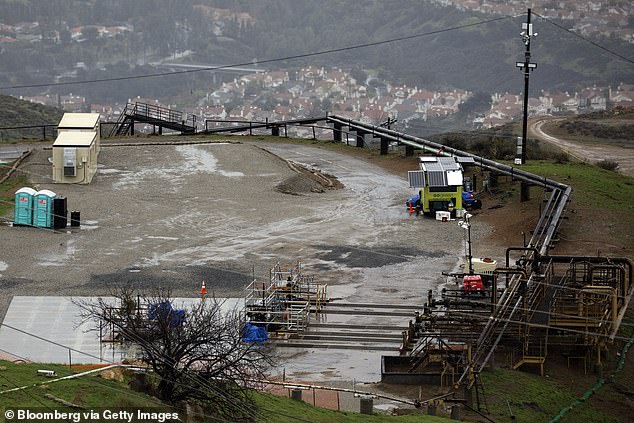 The Aliso Canyon accident in 2015 released around 100,000 tons of methane from an underground storage facility in California’s Santa Susana Mountains. Pictured is the SS-25 well, where the 2015 gas leak occurred 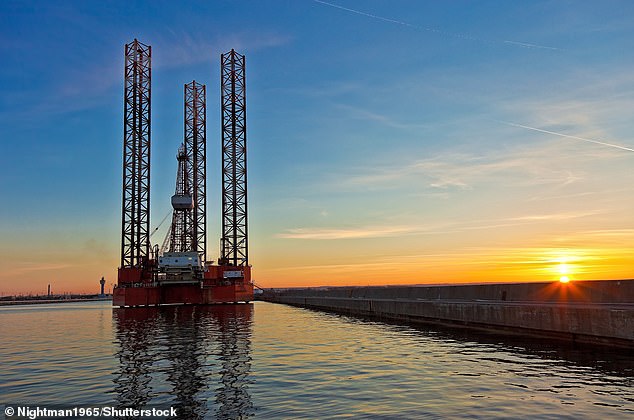 The Nord Stream pipeline leak is relatively ‘tiny’ and too small to affect humans compared with emissions from sources such as the coal and gas industries. Pictured, an oil rig for drilling an oil well

Methane is a colourless, odourless flammable gas, and the main constituent of natural gas.

Methane is a greenhouse gas, and the second biggest cause of climate change after carbon dioxide.

Both gases trap heat in the atmosphere, similar to the glass roof of a greenhouse.

During the day, the sun shines through the atmosphere and Earth’s surface warms up in the sunlight.

At night, the Earth’s surface cools, releasing heat back into the air, but some of the heat is trapped by the greenhouse gases in the atmosphere.

Too much of these gases can cause Earth’s atmosphere to trap more and more heat, causing the planet to warm up.

Methane has more than 80 times the heat-trapping potency of carbon dioxide over the first 20 years after it reaches the atmosphere.

However this does decrease over time, as it breaks down over the course of about a decade.

It is emitted during the production and transport of coal, natural gas and oil, as well as from livestock and decaying organic waste at landfill sites.

The team also point out that methane in the atmosphere is gradually removed by reacting with certain unstable ‘radicals’, such as hydroxyl radical, resulting in an approximate 10-year lifetime.

This is short-lived compared to CO2, which is said to hang around in Earth’s atmosphere for hundreds of years.

Researchers then further estimated the possible warming potentially caused by the Nord Stream methane leaks in the ‘near term’, defined as the next 20 years.

They found that the quantity of heat accumulated per unit mass of methane in the next 20 years after its emission into the atmosphere is 82.5 times that of CO2.

Armed with this information, they were able to calculate that the climatic impact of the leaked methane is equivalent to that of 20.6 million tons of CO2.

But this would raise the atmospheric CO2 concentration by only 0.0026 parts per million (ppm) and in turn cause a ‘tiny’ increase in warming that cannot be perceived in ecosystems or by humans, said study author Dr Xiaolong Chen.

The team conclude that human-cased or ‘anthropogenic’ methane emissions – from the likes of coal mining, agricultural activities and more – need to be reduced to hit the targets of the Paris Agreement.

Adopted in 2016, the Paris Agreement aims to hold an increase in global average temperature to below 2°C (3.6°F) and pursue efforts to limit the temperature increase to 1.5°C (2.7°F).

‘If we are going to achieve the warming target of below 1.5°C or 2°C set out in the Paris Agreement, damage to infrastructure such as this should be avoided so that we can better control and reduce methane emissions,’ said Dr Chen. 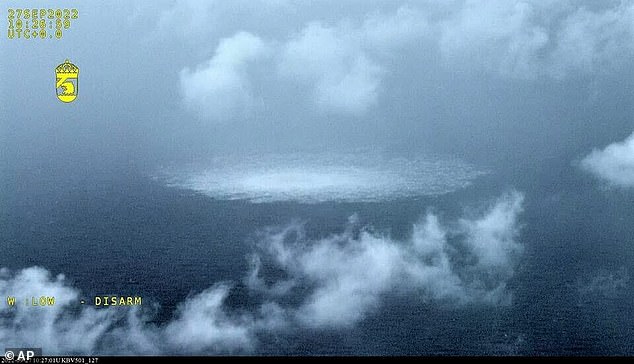 In this picture provided by Swedish Coast Guard, the gas leak in the Baltic Sea from Nord Stream photographed from the Coast Guard’s aircraft on Wednesday, September 27, 2022

But the Norwegian team also said this was ‘negligible’ and  only about 0.01 to 0.03 per cent of the methane emitted globally every year.

‘Reducing methane emissions needs to be a global priority this decade if we are to have any chance at keeping warming below 1.5°C by 2030,’ said Rona Thompson at NILU.

The European Space Agency (ESA) has already said that the Nord Stream leak ‘pales in comparison’ with the 80 million metric tonnes emitted each year by the oil and gas industry.

THE PARIS AGREEMENT: A GLOBAL ACCORD TO LIMIT TEMPERATURE RISES THROUGH CARBON EMISSION REDUCTION TARGETS

The Paris Agreement, which was first signed in 2015, is an international agreement to control and limit climate change.

It hopes to hold the increase in the global average temperature to below 2°C (3.6ºF) ‘and to pursue efforts to limit the temperature increase to 1.5°C (2.7°F)’.

It seems the more ambitious goal of restricting global warming to 1.5°C (2.7°F) may be more important than ever, according to previous research which claims 25 per cent of the world could see a significant increase in drier conditions.

The Paris Agreement on Climate Change has four main goals with regards to reducing emissions:

2) To aim to limit the increase to 1.5°C, since this would significantly reduce risks and the impacts of climate change

3) Governments agreed on the need for global emissions to peak as soon as possible, recognising that this will take longer for developing countries