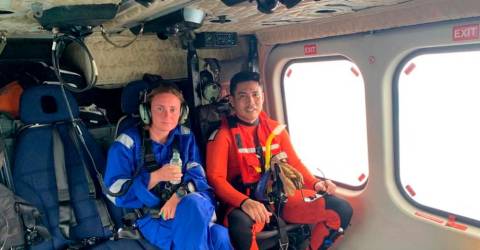 MERSING: Norwegian diving coach Kristine Grodem(pix), one of the four foreign divers who were reported missing while diving off Pulau Tokong Sanggol here, has been found safe about 30 nautical miles from the scene.

Johor Malaysian Maritime Enforcement Agency (MMEA) director First Admiral Nurul Hizam Zakaria said Grodem, 35, who was in full diving suit and equipment, was found floating by a tugboat en route from Indonesia to Thailand at 8.15 am in the waters of Tanjung Sedili, Kota Tinggi.

“The victim was then transferred to an MMEA helicopter and subsequently taken to Mersing for treatment.

“The search for the remaining victims, Alexia Alexandra (18); Adrian Peter (46) and Nathen Renze (14), is ongoing using the assets of the rescue team,” he told reporters at the Mersing District Office public jetty here today.

Nurul Hizam said the search operation at sea covered an area of 107 nautical miles while the air search covered 270 nautical miles, focusing on the southern part of the scene.

“The victim drifted south and was found in the waters of Tanjung Sedili. She is in stable condition and sustained no serious injuries,” he said.

Nurul Hizam said the Indonesian National Search and Relief Agency (Basarnas) and Singapore authority were also informed of the incident involving the four divers who were believed to be drifting towards the south of the island.

Apart from that, the Marine Department had issued a notice to ships sailing around the location to assist the victims if they encountered them.

Earlier, Grodem arrived at the Mersing Mini Stadium by helicopter at 12.05 pm and was then taken to Mersing Hospital in an ambulance.