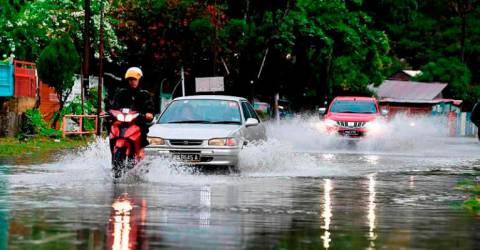 KUALA LUMPUR: The Department of Irrigation and Drainage (DID) has issued a notice of preparedness for possible flash floods in Penang, Perak, Selangor, Negeri Sembilan, Melaka, Johor, Terengganu, Sarawak and Sabah, as of 4 pm today.

In a statement, it said that based on rain forecast information provided by the Meteorological Department (MetMalaysia), the Southeastern Asia-Oceania Flash Flood Guidance System (SAOFFGS) and DID’s flood forecast model, there is a possibility of flash floods in several locations if heavy rain or a significant thunderstorm occurs within 24 hours after the notice was issued.

In Perak, the areas that might be affected are Hilir Perak, Kerian, Larut, Matang and Selama, while in Melaka (Melaka Tengah), Penang (Barat Daya, Seberang Perai Tengah, Seberang Perai Utara and Timur Laut), as well as Klang and Petaling in Selangor.

DID said that the notice was issued to allow all residents, especially in high-risk areas, to be aware of any possibility of flash floods during the period.

Meanwhile, MetMalaysia, in a statement today, predicted wind concentration in the coastal areas of Kelantan and Terengganu tomorrow, with the potential for thunderstorms, heavy rain and strong winds.

The wind concentration is also expected to occur in the Straits of Melaka for four days starting Monday (Nov 21), which has the potential to cause squall line incidents.

“This situation has the potential to bring thunderstorms, heavy rain and strong winds in the west coast states in the peninsula, especially in the morning,” it said.

MetMalaysia also advised the public always to refer to the department’s website at www.met.gov.my and social media accounts and to download the myCuaca application for the latest weather information.-Bernama