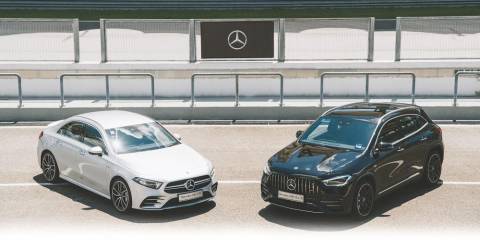 MERCEDES-BENZ Malaysia reached another milestone with the introduction of the locally assembled A 35 AMG and the GLA 35 AMG.

Previously, only the A 35 AMG was available in Malaysia in CBU form.

The GLA 35 AMG expands the model line up and both cars are now assembled at the Mercedes-Benz plant in Pekan, Pahang.

Visually the new A 35 AMG is nearly identical to the CBU model it replaces. It now runs on 19-inch AMG wheels which are nestled in wider wheel arches to accommodate the wheels.

Inside, the new A 35 AMG offers an enhanced equipment range that includes a 360° camera, heads-up display and AMG steering

Other than that, the interior also comes with sports seats with electronic adjustment up front. The interior is available in optional artico man-made leather or suede like dinamica microfibre black with AMG aluminium trimming in either black or silver.

The interior of the GLA 35 AMG is nearly identical. It features the same overall layout with the same MBUX system and offers the same leather options as the A 35 but comes with carbon-fibre like trimming instead. Just like its sedan sibling, the GLA offers the AMG performance steering wheel wrapped in nappa leather.

But the similarities end there. The GLA 35 AMG distinguishes itself by offering the light and sight package as standard that comes with 64 ambient lighting option, an auto-dimming interior mirror and driver’s exterior mirror function.

Both the A 35 and GLA 35 AMG come with the Burmester surround sound system.

The interiors of both cars may be slightly different, but both cars are powered by the same M260 2.0-litre, four-cylinder, turbocharged engine that puts out 306hp and 400Nm of torque.

This engine though is not new either and is carried over from the previous model and is a highly tuned version of the engine found in the A250.

Unlike the engines found in AMG models like the A 45S and above, the engine in the A 35 and GLA 35 is not put together by a single person, which is an integral part of the AMG “one man, one engine” ethos.

But that is not to say that the cars are not proper AMGs. As part of the launch, we were given three laps of the north track of the Sepang Circuit in both cars.

Both cars felt eager and responded to the tiniest of throttle input, which gave it a very edgy character.

We started and ended the drive in the Sport Plus driving mode. There are four driving modes on offer with Sport Plus being the most extreme with all systems on full alert.

Despite both cars coming with AMG Ride Control suspension, the GLA had noticeable body roll around the tighter corners of Sepang.

This is quite understandable because the GLA has a taller ride height and as such will tend to roll around a lot more than the A-Class.

The A 35 AMG thought felt like the wilder sibling. The one that did not get the full parental supervision and as such grew up to be the brawler.

The A 35 felt like it truly benefited from the AMG suspension. It felt more planted in fast corners, and body roll was non-existent in tighter ones.

It did feel like it had more understeer than the GLA, but at no point did it feel unmanaged.

After all, both cars comes with the Mercedes-Benz 4MATIC system that sends power to the axle that needs it the most.

In terms of outright performance, the A 35 accelerates harder than the GLA, it does the century sprint in just 4.8 seconds while the latter does it in 5.2.

After the drive, it was clear that the GLA 35 AMG is more suited to comfort and convenience. It is a car for the family man who wants a dash of sports.

The A 35 AMG though is for the wilder ones. If you appreciate a car that rewards hard driving and corner carving, the A 35 AMG is the car for you.

Both offer well built cabins with impressive features, and there’s no louder testament that you have made it in life than a AMG badge.